The Real Mandela (and His Tragic Legacy) 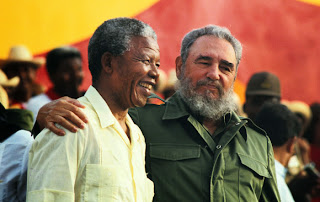 ...Mandela was always treated by the fawning Western press as a font of endless wisdom. But in fact many of his comments were appalling and silly. He had drunk deeply from the well of left-wing revolutionary theory and it never left his system. Even late in life, during his supposedly mellow period, he often spoke as an embittered Communist, saying of America, for example: “If there is a country that has committed unspeakable atrocities in the world, it is the United States of America.”

This is why Raul Castro had a place of honor at his memorial. Mandela was one of his brother Fidel’s biggest fans, calling his murderous revolution “a source of inspiration to all freedom-loving people” and praising his anti-Americanism: “We admire the sacrifices of the Cuban people in maintaining their independence and sovereignty in the face of a vicious, imperialist-orchestrated campaign.” A lot of Mandela’s cronies were just thugs , like Gaddafi, who had opposed apartheid for cynical reasons having nothing to do with racism.

Mandela’s supposedly delicate moral conscience didn’t extend to the victims of these thugs or the victims of his own Oprah-style Brave New World morality, which inspired him to pass one of the most liberal abortion laws in African history, under which hundreds of thousands of South African babies have died.

Almost all of the leaders, starting with Barack Obama, who trotted up to the podium on Tuesday to portray Mandela as a moral colossus subscribe to his selective understanding of human rights, under which “progress” is measured not by the elimination of human rights abuses but by the replacement of one abuse with another.

When Obama shook hands with Raul Castro at the memorial, defensive reporters, scrambling to put the best possible spin on it, purred about Mandela’s powers of reconciliation and healing even in death. A better explanation for the handshake is that Mandela’s legacy of ends-justify-the-means leftism was bound to bring liberal revolutionaries together.

Read the rest of this illuminating, provocative article ("The Tower of Babble") by George Neumayr in the American Spectator.
Posted by DH at 8:52 AM