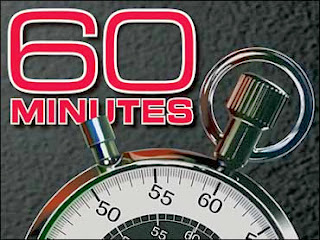 "60 Minutes" has been so constantly praised as great journalism that most Americans accept it on faith; that is, until they see "60 Minutes" tackle an issue or company or personage that they actually know something about.

Then, finally, they begin to realize that "60 Minutes" is just another propaganda program with one-sided coverage, manipulative methods, sly promotions of CBS interests, and consistently liberal politics.

In addition, the program has always had a preoccupation with pop culture celebrities that's almost as sophomoric as Entertainment Tonight.

I'm pleased therefore that the program has had a bad year as reported in some detail in this NRO story by Eliana Johnson.

Because anything that weakens the impact of "60 Minutes," actually strengthens the Republic.
Posted by DH at 10:06 AM