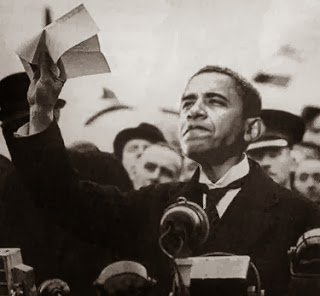 Ring the bells in sorrow and alarm. Barack Obama has, once again, been rolled by a Muslim dictator.

Here's a few worried press reactions, including a few from media sources who are usually loyal members of Team Obama.

* Israeli Prime Minister Benjamin Netanyahu on the Iran deal — “What was concluded in Geneva last night is not a historic agreement, it's a historic mistake. It's not made the world a safer place. Like the agreement with North Korea in 2005, this agreement has made the world a much more dangerous place. For years the international community has demanded that Iran cease all uranium enrichment. Now, for the first time, the international community has formally consented that Iran continue its enrichment of uranium." (“Israeli PM Netanyahu: Iran nuclear deal 'historic mistake’” by David Simpson and Josh Levs, CNN)

* The Obama administration has cut an interim nuclear deal with Iran that gravely worries some of America's strongest allies in the Middle East and even gives pause to some of President Barack Obama's allies in the U.S. Senate. It's easy to see what Iran gets out of this: a reprieve from crippling economic sanctions worth some $6 billion to $7 billion in cash. It's more difficult to figure that Iran views this as the first step toward giving up its nuclear ambitions. Iran will stall some of its development efforts, but it will not significantly step back from the timetable it faces to build a nuclear weapon…

The reason for deep concern, though, is that Iran escapes from some of the economic sanctions that forced it to negotiate in the first place. The Obama administration says those sanctions can be reinstated if Iran cheats or negotiations fail. But Iran will reap the benefit of billions of dollars. And it may not be that easy to persuade international businesses to forgo trade with Tehran if trade resumes.

Republicans, as would be expected, sharply criticized the terms of the deal. But Senate Foreign Relations Committee Chairman Robert Menendez, a Democrat from New Jersey, was unsparing as well. "In my view, this agreement did not proportionally reduce Iran's nuclear program for the relief it is receiving," he said. He might as well have said hope has triumphed over experience. (The editors of the Chicago Tribune.)

*  Sen. Bob Corker, R- Tenn., the senior Republican on the Senate Foreign Relations Committee...warned that the Iranian regime “has consolidated their gains” and was now “spiking the football in the end zone” and claiming that it has the right to keep enriching uranium.

The accord will unfreeze some of Iran’s overseas assets and ease some trade sanctions in return for the Tehran regime allowing inspections of its nuclear facilities and halting some steps that could lead to a nuclear weapon.

“It looks like we've tacitly agreed that they will be enriching (uranium) for commercial purposes down the road,” Corker said. “So I think you're going to see on Capitol Hill … a bipartisan effort to try to make sure that this is not the final agreement.” Corker added, “this administration is big on announcements, very short on substance. We see that time and time again.”…

Sen. Charles Schumer, D- N.Y., said he was "disappointed" by the interim agreement "because it does not seem proportional. Iran simply freezes its nuclear capabilities while we reduce the sanctions.... This disproportionality...makes it more likely that Democrats and Republicans will join together and pass additional sanctions when we return in December."

But Obama warned Congress in his statement Saturday night to not try to pass any new sanctions, saying “now is not the time to move forward on new sanctions, because doing so would derail this promising first step, alienate us from our allies and risk unraveling the coalition that enabled our sanctions to be enforced in the first place.”

Rep. Elliot Engel, D- N.Y., the senior Democrat on the House Foreign Affairs Committee and a strong supporter of Israel which has been sharply critical of the deal, said the accord “makes it very difficult to continue the sanctions” against Iran and indicated that Congress was unlikely to pass new sanctions at this point. He noted that an Iran sanctions bill was passed by The House in July by a vote of 400 to 20, but the New York Democrat said, “It’s difficult for the Senate to do sanctions now” now that the Obama administration has entered into a six-month deal with Iran. “It’s disappointing to me that Iran is still going to be allowed to enrich (uranium) while they’re talking. I would have thought that that should be a prerequisite to any kind of talks,” Engel said. (Tom Curry, National Affairs Writer, NBC News)

* The Obama administration says the agreement will degrade Iran’s nuclear capacity, halt its current progress, and lay the groundwork for a final deal, in exchange for discrete concessions on sanctions. But this “freeze” is incomplete and as reversible as the term suggests, and the effect of the loosening of the sanctions will be far-reaching.

Reminiscent of his claim that a strike on Syria to deter future chemical-weapons use would be “unbelievable small,” Secretary Kerry said that the deal’s concessions translate into “very little sanctions relief.” This is an odd description for measures that take up a full page of the agreement’s four-page outline and extend to suspending sanctions on petroleum and gold, authorizing new shipments of auto and aircraft parts (which are of military and economic use to the Revolutionary Guard), allowing U.S. and EU companies to insure oil shipments, increasing the caps on EU trade in non-sanctioned goods, and more…

The White House estimates the value of these particular adjustments to be about $6 to $7 billion, which is no paltry sum in exchange for so little from Iran. But the real economic value is in perceptions: This deal makes it known that our Western leaders view Iran as a legitimate negotiating partner — in fact, one that they expect will agree to a final deal in six months. Consider the effect that this change will have on the foreign firms that have always remained capable of striking profitable deals with Iran but have held off given the uncertainty and opprobrium surrounding Tehran; now they can strike those deals in the knowledge that the American executive branch is making that easier, not harder.  (The editors of National Review.)
Posted by DH at 10:15 AM