Harry Blackmun Had a Birthday, An Event He Denied to Millions. 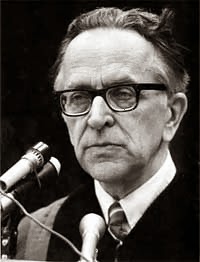 In Nashville, Illinois, the human fetus to become known as Harry A. Blackmun emerges safe and sound from his mother’s womb. Some sixty-five years later, Justice Blackmun authors the Supreme Court opinion in Roe v. Wade. (See This Day for Jan. 22, 1973.)

Somehow the same people who think it meaningful to criticize Justice Thomas for opposing affirmative-action programs from which he putatively benefited don’t criticize Blackmun for depriving millions of other unborn human beings the same opportunity that he was given.
Posted by DH at 8:22 AM