9 Things About Planned Parenthood Everyone Should Know 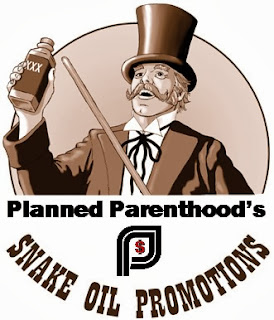 Joe Carter over at the Gospel Coalition notes "9 Things You Should Know About Planned Parenthood."

It is an excellent primer to pass around -- excellent too to print off and use as a reference for letters to editors, political officials, business leaders, your pastor, and so on.

1. Planned Parenthood Federation of America has 95 affiliates and 865 health centers, according to its latest annual report, which covers the 2008-09 fiscal year. They require that at least one clinic per affiliate must perform abortions. PP performs over 320,000 abortions a year. [That's surgical abortions alone. The number of preborn kids killed through PP chemicals is incalculable.]

2. The motto for this year's PP gala is "Our past is our prologue." Part of the past the organization will be celebrating includes its founding by the notorious racist and eugenicist Margaret Sanger. Sanger wanted to control the reproduction of immigrants, the poor, certain religious groups, and anyone else she thought was from an "unacceptable" heritage. Sanger referred to such people as reckless breeders who were "unceasingly spawning a class of human beings who never should have been born at all..."

In 1939 Sanger started the "Negro Project" and attempted to get Christian ministers to aid her effort. As she wrote in a letter to a fellow eugenicist, "we do not want word to go out that we want to exterminate the Negro population and the minister is the man who can straighten out that idea if it ever occurs to any of their more rebellious members."

5. PP has repeatedly and consistently turned a blind eye to reports of statutory rape.

7. Last month a Planned Parenthood of Florida lobbyist, testifying against Florida's Born Alive Infants Protection Act, told lawmakers that if a baby survives an abortion, it is debatable whether that baby should live or die.

8. Some Planned Parenthood clinics have demonstrated a willingness to partner with pimps and sex traffickers to exploit young women instead of safeguarding their health and safety.

9. While in the Illinois state senate, Obama worked with PP to determine how he should vote on a partial-birth abortion legislation. With Planned Parenthood's blessing, he voted "present" to protect his "100 percent" record on pro-abortion votes.
Posted by DH at 10:28 AM