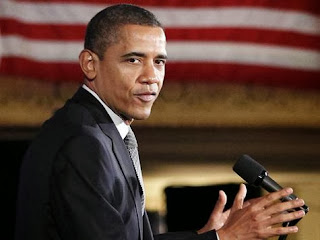 Excerpts below are from "The Muslim Brotherhood President," an illuminating article written by Robert Spencer in Front Page Magazine.

The State Department announced Wednesday that it was cutting hundreds of millions in military and other aid to Egypt, and make no mistake: this was not a government shutdown move. This was the President of the United States blackmailing a sovereign state to force it to restore the Muslim Brotherhood government he favors. With the Egyptian economy in crisis and Egypt strongly dependent on this aid, Obama has just effectively cast his vote for the Muslim Brotherhood’s return to power – and his vote outweighs that of millions of Egyptians.

This comes as the Brotherhood is becoming increasingly violent in Egypt, belying its “moderate” reputation. The New York Times reported Tuesday that “three brazen attacks across the country included a drive-by shooting near the Suez Canal that killed six soldiers, a car bomb that killed three police officers and wounded dozens near the Red Sea resorts area, and the first rocket-propelled grenade launched in the struggle, exploding near an elite enclave of the capital and damaging a satellite transmitter.”

Obama’s support for the Muslim Brotherhood goes back to the beginning of his presidency. Early in 2009, when the group was still outlawed in Egypt, he met with its leaders. He made sure to invite Brotherhood leaders to attend his notorious speech to the Islamic world in Cairo in June 4, 2009.

He even invited Ingrid Mattson, then-president of the Islamic Society of North America (ISNA), to offer a prayer at the National Cathedral on his first Inauguration Day – despite the fact that ISNA has admitted its ties to the Brotherhood. The previous summer, federal prosecutors rejected a request from ISNA to remove its unindicted co-conspirator status.

With Brotherhood operatives so warmly favored in the Obama Administration, it’s no surprise that he would want them in power in Egypt as well. And by cutting off aid, he’s strong-arming the Egyptians until they have no choice but to agree.
Posted by DH at 10:11 AM