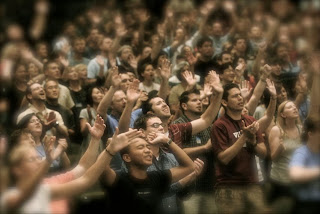 If you don't stand with truth, you'll fall -- even for the silliest and most sinister of lies. And because evangelical leaders for several decades now have failed to teach the Bible to the youth of their churches, they have lost them to an irrational and irreligious culture.

Read the following column from Chelsen Vicari for some tragic examples.

Newark, N.J. Mayor and Senate hopeful Cory Booker is not known for proclaiming his love of Jesus or evangelizing to his fellow politicians and constituents. So as a 20-something evangelical, I find it curious that Mayor Booker is a featured key-note speaker at this weekend’s Catalyst Atlanta 2013, a Christian conference gathering together young evangelicals for worship, learning, and sharing their faith in Jesus Christ.

The mission of the Catalyst conference seems simple. So, why is Mayor Booker hoisted between speakers like Dave Ramsey and John Piper at a conference supposedly geared towards worshiping Jesus Christ, not catapulting Senate campaigns? There is an answer, but it is not so simple: Liberal Christians -- despite how “apolitical” they claim to be -- are feeding a repackaged version of evangelicalism to millennials for their own radical, yes political, agenda.

This year’s Catalyst conference is one such example of their crusade to spread liberal ideology, not theology. Why else would Catalyst invite Mayor Booker, whose speaker bio doesn’t even include the word Jesus, Christian, or God? Oh, but according to his political biography, as Democratic National Committee (DNC) co-chair he did advocate for no-restriction abortions and tax-payer funded abortions regardless of infringements to religious liberty...

Not only are liberal Christians sidestepping abortion, gay marriage or socialism, but are rallying for them.

In a recent op-ed for CNN.com titled, “Why Millennials Are Leaving the Church,” Rachel Held Evans throws out the false claim that young Christians are leaving the church because Christianity has become “Too political, too exclusive, old-fashioned, unconcerned with social justice and hostile to lesbian, gay, bisexual and transgender people.”  She advocates for the church to become less concerned with sex (a.k.a. abortion and contraception) and more consumed with eradicating poverty and embracing homosexuality.

If you’re thinking her diatribe resembles less of the Scriptures and more of the DNC platform, you’re not alone...

It is time for the liberal evangelicals to stop lying. It is time they come clean with millennials about their liberal political motives...

From "Why Liberal Evangelicals are Lying to Millennials" by Chelsen Vicari, the Evangelical Program Director for the Institute on Religion and Democracy, and published here at the IRD blog, Juicy Ecumenism.
Posted by DH at 10:12 AM