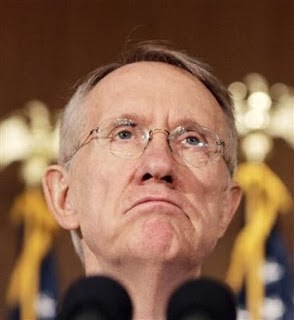 The comments below are from today's "Morning Jolt with Jim Geraghty," a e-mail newsletter you can receive for free simply by signing up for at National Review Online.

It's free. And it's really good.

The Sadism of Harry Reid

sadism: (noun) enjoyment that someone gets from being violent or cruel or from causing pain...

On Saturday, the House of Representatives passed a resolution 407-0 to ensure back pay for federal workers furloughed because of the shutdown. Those federal workers still have the problem of no paycheck coming until after the shutdown ends -- but if and when this bill passes, they can at least take assurance that they'll get paid for the weeks they've been furloughed.*

This is quite the revealing moment, as the leadership of the Democratic party and federal government workers are supposed to be the best of friends -- symbiotic, really. But when the moment comes to help out federal workers, Harry Reid drags his feet. The only plausible motivation is that the Democrats' strategy for "winning" the shutdown fight requires maximizing the pain to as many Americans as possible, so that the pressure is maximized on the GOP opposition to accept a deal that amounts to unconditional surrender.

Thus, we have a government shutdown where the federal Amber Alert site is down, but Michelle Obama's "Drink Water" site remains up. (The volunteer site, AmberAlert.com, and MissingKids.com are still up.) Now wonder this morning people are saying the president lives in "the Spite House."

I hope those federal workers are paying attention.

Harry Reid drags his feet on alleviating the financial anxiety of hundreds of thousands of furloughed federal workers, and he's refused to bring to the floor seven continuing resolutions, all passed by the House, all passed by wide and fairly bipartisan majorities (all or almost all of the Republicans, and another 20 or so House Democrats):

Not a single one of those resolutions says anything about Obamacare.

We know why Harry Reid isn't bringing them to the floor. If he did, they would pass. Senate Democrats wouldn't be able to vote "no" on any of those priorities without providing fodder for attack ads next fall (maybe the District of Columbia). And if they pass, the pain of the shutdown is mitigated in part.

Harry Reid doesn't want to minimize the pain of the shutdown. He wants to maximize it...
Posted by DH at 4:16 PM