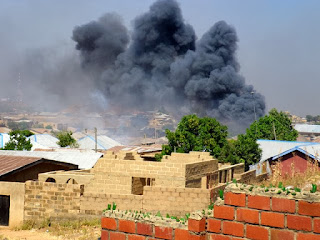 From the Facebook page of Voice of the Martyrs comes this encouraging report, complete with a very uplifting video clip.

Just got this new video of Weng walking in his new shoes!

Weng Goodluck Tshua was three weeks old in March 2010 when Fulani Muslims attacked his village of Dogo Nahawa and slaughtered 501 Christians. All nine members of his family, including his father and mother, were killed. He was rescued from his burning house, but not before the fire had consumed his feet. As Weng has grown over the past few years, he has been unable to run around or even walk. But a VOM prosthetics team is helping change that.

After studying his feet, the prosthetics team fashioned special shoes for both of his misshapen limbs. They returned several months later with specially fitted shoes that can be adjusted as three-year-old Weng continues to grow. Each shoe is made of three layers. As Weng grows, the inner layers can be removed as needed, to allow more room in the shoes. The team plans to provide new shoes for Weng before he grows out of the final layer of these shoes.

You can support blessings like this one to Weng and help provide for other Christians in need of medical care due to persecution by giving to support VOMedical.