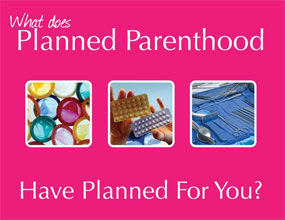 Students for Life of America is taking on an ambitious educational project this fall -- a tour of 41 colleges in 20 states in which they'll be alerting students to the straight skinny about Planned Parenthood.

Among the revelations will be Planned Parenthood's carefully calculated schemes to establish long-term "customers" for its nefarious services:

Plan A: Provide poor quality, faulty birth control. In its February 2005 issue of Consumer Reports, the non-profit Consumers Union ranked two of Planned Parenthood’s condom lines the lowest out of all the brands that they tested.

Plan B: Encourage daily hormonal treatment. PP encourages young women to begin a daily regimen of hormonal birth control, and they placate fears about side effects by saying that modern hormonal contraceptives are safer than earlier iterations because they contain smaller amounts of hormones, even though there are still dangerous side effects like death. Should something go wrong though, they’ll then offer you those same hormones in massive doses (the “morning after pill” which can cause early abortions), claim it’s perfectly safe, and hope you won’t notice they’re contradicting themselves

Plan C: Offer deceptive counseling and biased information. If things didn’t go so well with the condoms and birth control, and pregnancy does occur, then Planned Parenthood offers “options counseling” to help decide a course of action. However, dozens of former employees have blown the whistle on the unscrupulous nature of PP’s “options counseling,” acknowledging that it was commonly used to steer women towards abortion (which they profit from) instead of adoption or parenting (which they don’t get paid for). In 2011, PP performed 145 abortions for every 1 adoption referral and has now mandated that every affiliate performs abortions.

For more information on this project and on Planned Parenthood in general (like how many abortions the business commits, how big a chunk of government money it is awarded every year, and the miniscule percentage of its activity in adoption and health screening), check out this SLA page.