Revising (and Thus Losing) the Love of God 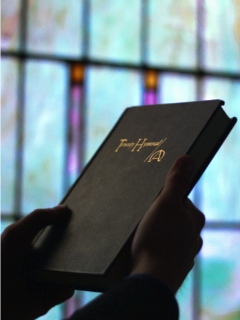 ...The Committee on Congregational Song of The Presbyterian Church (U.S.A.) recently voted to exclude the popular modern hymn "In Christ Alone" from their hymnal because it included the line "Till on that cross as Jesus died, the wrath of God was satisfied." Apparently recognizing the popularity of the song, the Committee asked the hymn's authors for permission to change the end of that line to "the love of God was magnified" in order to be included in their hymnal. The authors refused to make the change. The Committee, it appears, couldn't abide the idea of God's wrath, so the song was left out of the hymnal.

It's disconcerting to see Christians devalue the great love of God in the name of a "loving god." There is no question that the good news of the Gospel centers on the love of God; but, to deny God's wrath eliminates the need for the good news. It also minimizes the culpability of sinners, denies the justice of God's punishment, and trivializes God's love for us….

Sin is not a popular notion in a therapeutic society. People don't like the idea that they are sinners. And the idea that we would suffer eternal damnation because we deserve it is even more offensive. We want to embrace God's love without taking into account his wrath and justice. We want the benefit of the good news without acknowledging the bad news.

We are naturally inclined to reject the God of the Bible, but this shouldn't come as a surprise—we're told as much in the Bible! We prefer to cherry pick the Bible and fashion a god that seems more palatable than the one the Bible presents. But a god of our creation is no god at all. He is simply a customized construct designed to make us feel better about ourselves.

Such a creature is not worthy of our worship. The God of the Bible is.

Profitable reflections from attorney, author, and Chairman of the Center for a Just Society, Ken Connor. Here's the whole article, "Bad News/Good News Bible" over at Town Hall.

To add a musical highlight to this piece, here is a video clip of the aforementioned "In Christ Alone." It is a poignant song, so different from what is featured in most evangelical churches today in that it is both moving and profoundly theological. Performing it here are Keith and Kristyn Getty, an Irish husband and wife team who are among the preeminent hymn-writers of the modern era.

And, not incidentally, Keith Getty and Stuart Townend are the co-writers of the song. So if you'd like to drop them a line to thank them for standing their ground and not allowing the PCUSA to dilute the biblical theology their song faithfully presents, you can do so by using the Contact Page at their web site.