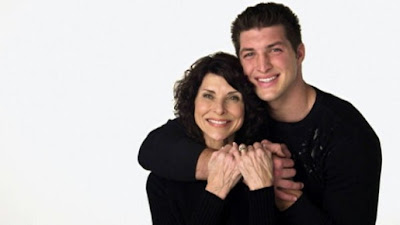 Claire sent this report out to her Facebook friends Saturday and I thought I'd pass it along here too. Neat stuff.

I just returned from a breakfast sponsored by Essential Pregnancy Services (EPS).  It was held at the Omaha Community Playhouse with a mini-continental breakfast catered by Wheatfields.  Over 600 folks milled around as they ate, drank coffee and looked at some of the informational tables set up.  We then went into the theater for the program.

There was a very impressive report via video of the wonderful life-saving work EPS has done in 2013.  The pictures and testimonies from some of the clients were heart-warming.  Then the main speaker was introduced after a short video about her family.  When the lights came on, Pam Tebow was at the podium.

Pam was a delightful woman who unashamedly talked about Jesus Christ.  She told her story of how she and her husband met at college and then went to the mission field in the Philippines.  Of course, everyone wanted to hear the story of football hero Tim, her youngest son, and his difficult entrance into the world.  Pam and her husband chose not to abort their Tim because they cherished life and had already dedicated Tim to the Lord.  At one point in Pam’s pregnancy, the doctor said that Tim wasn’t a baby yet, just a tumor.  So, in an interview Tim and his Mom did with Robin Roberts, they told the story of how his brothers and sisters called him Timmy Tumor for the first bit of his childhood.

Tim’s accomplishments in football have not only given him a platform for spreading God’s Word but also for his Mom and Dad to do the same.  Pam has a strong passion for the pro-life mission and has taken this on by speaking around the country and personally being involved in a pregnancy center in her hometown. She was very passionate about how everyone in the audience needs to get involved in some way in a life-saving ministry and spoke highly of the great work EPS has done and will do.

Naturally, Pam told a few Tim Tebow stories.  And she was a proud mother of her son for all of his accomplishments but her main emphasis was how Tim was doing God’s work, first as a Heisman Trophy winner and now in the NFL by his testimony and his godly example on and off the field.

Pam and her husband wanted their children to know God’s Word so when they were little she would put different Scriptures to music and sing them to her kids. (Now she does it with her 5 grandkids too.)  She was very clear about the manual God has given us in the Bible to help us know the truth and to live the truth.

At the end of her talk, she prayed a prayer her son-in-law wrote that explained again the importance of knowing Christ as your Lord and Savior.  Throughout the talk, Pam was strong in her faith, her love for God, her love for her family (and football!) and her love for life.
Posted by DH at 10:00 AM