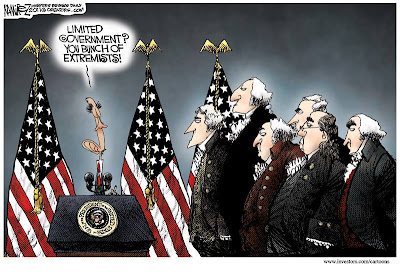 You couldn't make this stuff up if you tried.

A Department of Defense teaching guide meant to fight extremism advises students that rather than “dressing in sheets” modern-day radicals “will talk of individual liberties, states’ rights, and how to make the world a better place,” and describes 18th-century American patriots seeking freedom from the British as belonging to “extremist ideologies.”

The guide comes from documents obtained by Judicial Watch and is authored by the Defense Equal Opportunity Management Institute, a DoD-funded diversity training center.

Besides a brief reference to 9/11 and another to the Sudanese civil war, the guide makes no mention of Islamic extremism.

The guide also repeatedly tells readers to use the Southern Poverty Law Center as a resource in identifying hate groups. The SPLC has previously come under fire for its leftist bias and tendency to identify conservative organizations such as the American Family Association as hate groups.

In August 2012, an attempted terrorist attack occurred at the Family Research Council, another conservative organization the SPLC has branded a hate group. FRC president Tony Perkins said the SPLC’s designation prompted the attack, stating the gunman “was given a license to shoot … by organizations like the Southern Poverty Law Center.”…

(Charles Rollet, Daily Caller)
Posted by DH at 9:17 AM