Cholera in Haiti -- Thanks to the United Nations 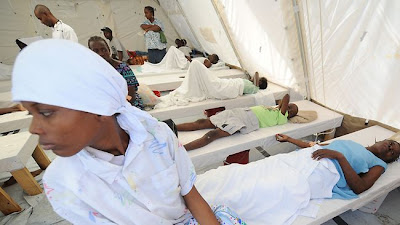 ...The disease had been unknown in Haiti for more than a century. In October 2010, United Nations peacekeepers leaked cholera-infected fecal waste into a tributary of Haiti’s largest river—the same river countless Haitians use for bathing, cooking, and drinking. Eight thousand Haitians have died as a result, and counting. The number spiked as recently as spring of 2013 during Haiti’s wet season.

The United Nations’ responsibility for the outbreak has been confirmed in study after study. Epidemiological research shows that a combination of inadequate screening of peacekeepers from Nepal—where cholera is endemic—and poor sanitation practices at the U.N. base in central Haiti caused the outbreak. Microbiological studies demonstrate that the strain of cholera that seeped into Haiti’s waters perfectly matches the strain of cholera prevalent in South Asia...

However, even in the face of irrefutable evidence, the U.N. continues to deny its role. Previously, the organization rejected claims for relief from more than 5,000 cholera victims, simply declaring that the claims were “not receivable.” This week, U.N. spokesman Martin Nesirky responded to renewed calls for accountability by asking the international community to donate money to help Haiti recover from the “double tragedy of earthquake and cholera” while saying nothing about the part the U.N. played in visiting this tragedy upon the country in the first place...

(From "The United Nations’ Shameful History in Haiti" by Charanya Krishnaswami, published in Slate.)
Posted by DH at 8:21 AM