"The Only History That Is Worth a Tinker's Damn" 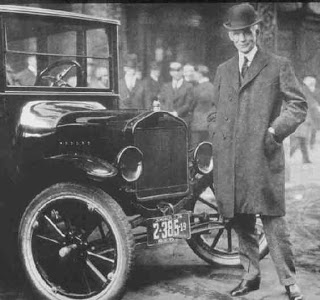 Of course, the portion of that quote which has gone down in...uh, history, is the first line. But it is actually the last line that is the most relevant to modern culture.

Indeed, it's pretty obvious that the cultural "powers that be" (politics, academia, Hollywood) are determined to escape what they believe are the shackles of the past. They are progressives through and through who believe that civilization is like detergent or breakfast cereal -- only the "new and improved" brands should be allowed on the shelves. Everything else should go to the trash bin.

Therefore, the virtues of Western culture, no matter how beautiful, ennobling or indispensable for a society's health (think of the U.S. Constitution, religion, marriage, family, etc.) are ignored if not mocked and vilified.

Yes, the words are Henry Ford's. But the sentiment is alive and well in the hearts of today's progressives.
Posted by DH at 12:05 PM