Contemporary Church Music: Enjoy It? Endure It? Or Escape It? 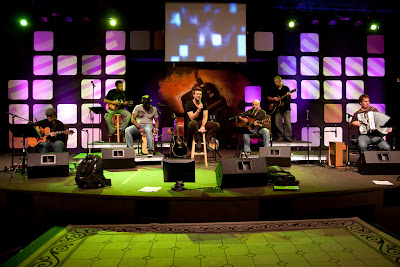 * “I have always kept one end in view, namely, with all good will to conduct well-regulated church music to the honor of God.” (Johann Sebastian Bach)

*  "Oh my, no. The church must never sing its songs to the melodies of the world.” (Fanny Crosby)

* "'What a way to learn great theology!' That’s what comes to mind whenever I sing one of those old hymns. 'And Can It Be' is like putting the doctrine of salvation to music. 'Come Thou Fount of Every Blessing' is a melodic lesson in grace. No wonder good hymns make for strong faith!" (Joni Eareckson Tada)

Okay, I have a confession, though it's a confession which my friends will confirm has never been a secret. And I make it again today without apology.  I have for decades been frustrated (no, that's not quite strong enough, make it thoroughly turned off) by the music featured in modern evangelical churches.

Indeed, when the hymnals were tossed out and replaced by overhead projectors...when the thoughtful, intellectually stimulating songs of Christianity's heritage were exchanged for repetitive and inane choruses...when the volunteer choirs and song leaders were replaced by entertainment-oriented worship teams who were allowed to dictate to the congregation when to stand, sit, clap, hold up hands, etc...when the music's volume increased to the levels at which I used to play Steppenwolf when stoned...and when unbridled emotionalism not only trumped but even eclipsed the traditional religious virtues of rationality, orderliness and corporate fellowship, I checked out.

And I wasn't alone. Many others, especially men, headed towards the nearest exit too.  George Barna, in describing how profound a part church music now plays in contemporary religious life, said "This is the feel; this is the sound that constitutes who you are and what you’re about."

But my redemption, my ongoing relationship with Jesus Christ and His Church, my responsibilities to be salt and light in a dying world -- these are much more important and much more involved than just church music.  I'm afraid that contemporary worship music does provides "the feel" for so many Christians in the West. But I resent (and steadfastly oppose) the naive notion that "the sound constitutes who I am and what I'm about."

But where were those evangelicals to go, the ones who didn't care for the loud music, the maudlin (often mindless) choruses, the coercive worship leaders, the dramatic emphasis on emotional experience?

Well, many of them turned to liturgical churches, places where they hoped to find order, contemplation, beauty, tradition, and a principled and relevant agenda for social action, especially about such biblical priorities as the sanctity of life. Others looked around until they discovered those few evangelical churches that hadn't given in (at least, not completely) to the new wave.  But way too many evangelicals just dropped out of church altogether.

Of course, the larger percentage of evangelicals (men and women) who were initially uncomfortable with the new music and the new attitudes learned to adapt. "Everyone else seems to be enjoying it. I guess I'd better get with the program too." In so doing, their church experience (and usually their religious lifestyle) changed. More emotional, more introspective. And less oriented to theology and mission.

Many of you will want to write and tell me that your church is an exception. Good. I'll be glad to hear it. Others will say, "Right on, brother. So come on over and join us in Rome...or Constantinople...or Geneva." Still others will simply dismiss my criticism out of hand, seeing it as just another peccadillo from an aging curmudgeon who won't accept the social realities of the 21st Century. Fair enough, there's certainly some truth in that. After all, I was defiantly counter-culture in 1969 only to find out the next year (the year of my conversion to Christianity) that my counter-culture life was only beginning. And, of course, over 30 years in the trenches of pro-life activism have not made me any fonder of modernity, be it in art, film, literature, politics, fashion...or church music.

So curmudgeon though I may be, you may still find these observations (and opinions) of some value to consider. I hope so.

Also, for another provocative perspective on this matter, you might find this article of interest, "Is individualism killing worship?" It is written by David Murrow, an author, former pastor, and the director of Church for Men. And, if you don't agree with his views, you may find someone in the comments section that you do agree with.

By the way, my thanks to Jim Myers for drawing my attention to the Murrow article via a Facebook post. But don't blame Jim for anything I've written that gets you riled. That's on me.
Posted by DH at 12:50 PM