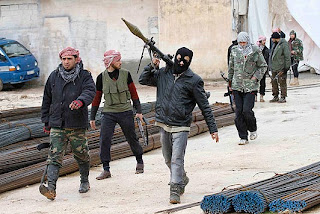 The Washington Post reports has a report on those "rebels' the West (including President Obama) has begun to support. (Sigh.)

When a 14-year-old boy from the Syrian city of Aleppo named Mohammad Qatta was asked to bring one of his customers some coffee, he reportedly refused, saying, “Even if Mohammed comes back to life, I won’t.”

A group of Islamist rebels, driving by in a black car, reportedly heard the exchange. They stopped the car, grabbed the boy and took him away….

The rebels, according to ABC News’ reconstruction of the Syrian groups’ reports, appear to have whipped Qatta. When they brought him back to where they’d taken him, his head was wrapped by a shirt.

The rebels waited for a crowd to gather; Qatta’s parents were among them. Speaking in classical Arabic, they announced that Qatta had committed blasphemy and that anyone else who dared insult the Prophet Mohammed would share his fate. Then, the shirt still wrapped around the boy’s head, the rebels shot him in the mouth and neck...
Posted by DH at 9:25 AM