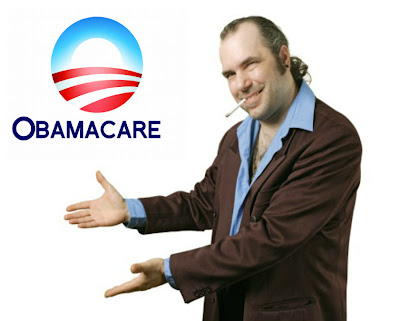 It's an all-out sales campaign.

Why? Because there's no way ObamaCare sells on its own merits. So you, Binky, are picking up the very expensive tab to sell it to yourself.

Here's more on the menacing matter from Bruce Japsen at Forbes.

As states and the U.S. government prepare to market health plans to the uninsured, a feeding  frenzy has begun among advertising and marketing agencies clamoring to get  a portion of promotional spending that could reach billions of dollars.

The potential windfall to ad, PR and marketing shops could run into the hundreds of millions of dollars just from government business alone to market the online marketplaces where consumers will begin enrolling in health plans on Oct. 1 of this year.  And once ad dollars from private health insurance giants like Aetna (AET), Cigna (CI), Humana (HUM), UnitedHealth Group (UNH) and Blue Cross plans are included from their efforts to reach a new market of uninsured, the ad spending could reach into the billions of dollars…

The barrage of advertising across the country is expected to begin this summer.

“It’s going to be Black Friday for health insurance,” Michael Mahoney, senior  vice president of consumer marketing for GoHealthInsurance.com,  a technology company with a platform used for purchasing health insurance, told Forbes in an interview. “Just like the holiday shopping season has its rush, this is going to be a rush to be the first mover to get out in front. Most people have heard about the Affordable Care Act but they have not seen any messaging from the government or private entities about what to anticipate next.”

The Obama administration says states may use federal grants for marketing activities that include “production and distribution of brochures, direct mail, print ads, social media, and digital/online ads, and TV and radio buys” related to their exchanges. Here’s a link with more detailed information on use of federal funds for marketing.

Whether the ad and marketing spending will be effective is another story.
Posted by DH at 10:22 AM