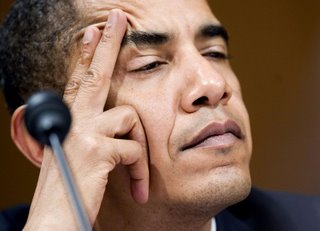 Barack Obama's national security speech yesterday afternoon (actually, it was more of an anti-security speech) demonstrated again how naive, foolish and utterly dangerous this man is to Americans and her allies.

In his speech, Mr. Obama went beyond utopian ideals -- way beyond even wishful thinking. His narcissism is so deep that he seems to really believe that the jihad against the West is going to end merely because he says it must.

Really, Mr. President? Send your speech to those Islamic axe-murderers in England and see how they react.

But, of course, much more alarming than yesterday's performance is that Barack Obama has gone way beyond thumb-twiddling speeches. His policies have gone a dangerous way towards dismantling America's military, dissing our best allies, and tearing down our standing in the world.

Here, by the way, are a few of the web's best responses to the President's speech.

"Obama’s Speech: Hamlet as Wartime Leader" by Bing West (U.S. Marine and a former assistant secretary of defense) over at NRO.

In seventy lugubrious paragraphs, President Obama today asked America whether as commander-in-chief he should bomb terrorists. He concluded that sometimes he should, and sometimes he shouldn’t. He couldn’t quite make up his mind. Therefore, he would appoint a panel to advise him.

Mr. Obama has already authorized more than 200 such drone bombings. His staff has bragged that before ordering a bombing, he personally reviews who lives and who dies. Imagine if Prime Minister Churchill or President Truman had appeared on television to announce an advisory panel before bombing our enemy. We would be appalled. The president appeared before us not as our leader, but as our Hamlet.

The president explained that we are not at war as we were on 9/11. In one paragraph, he said,“we must define our effort not as a boundless global war on terror.” A few paragraphs later, he said, ”al-Qaeda and its affiliates try to gain a foothold in some of the most distant and unforgiving places on Earth.”

English translation: The war on Islamic terrorists is not boundless, but it does encircle the globe. Welcome to New Age geography.

Mr. Obama then criticized the Guantanamo prison for terrorists. “We compromised our basic values,” he said, “by detaining individuals in a way that ran counter to the rule of law.” His remedy? He was sending 62 of the 86 prisoners back to Yemen. Those killers would then be someone else’s problem. Let’s hope Yemen does not copy the president’s example and let them loose to kill more Americans. That result would conflict with “our basic values.”

The rationale for the speech was obvious: Forget Benghazi, the IRS, and wiretaps of journalists. Instead, let’s talk about drones, Guantanamo, and the irresolvable burdens of the commander-in-chief. Having not told the whole truth about the death of our ambassador to Libya, the IRS targeting of U.S. citizens, and the FBI targeting of journalists, the president wanted to change the subject and divert attention.

The speech was cynical and sly.

Also check out, "Obama’s Speech: Replacing Nothing with Nothing" by James Jay Carafano at NRO.and this clip of Charles Krauthammer responding on Fox News.