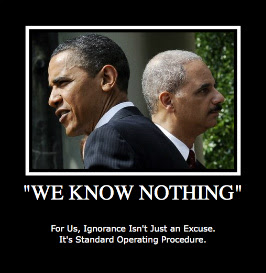 For Democrats in the Obama administration (including Himself), ignorance is truly bliss. Indeed, if their own statements are to be believed, ignorance is also a defense, an excuse, and standard operating procedure.

In this morning's Washington Post, Dana Milbank excoriated Eric Holder for his mealy, mousey performance yesterday before the House Judiciary Committee. Holder didn't know anything (and I do mean, anything) about his DOJ snooping through the phone records of Associated Press offices and reporters. And he wasn't even curious about finding anything out.

But Milbank concluded, "When the Justice Department undermines the Constitution, recusal is no excuse."

Of course, this wasn't the first time Eric Holder has prided himself on his ignorance. He knew nothing relevant about Fast & Furious, several cases of voter fraud and intimidation, why the DOJ refused to obey the law by defending DOMA, persecution of pro-life activists, and so on.

Eric Holder thinks ignorance is a good thing...so good that he wants to make sure the American public remains ignorant of all these things too.

Here's one more example of AG Holder's contented surrender to know-nothingness. Over at NRO's The Corner, Kathryn Jean Lopez posted an excerpt of the hearing that hasn't yet received anything close to the attention it deserves.

Representative Trent Franks raised the issue of Kermit Gosnell with Attorney General Eric Holder today, asking if the Born-Alive Infant Protection Act has ever been enforced. The attorney general of the United States, the week of Gosnell’s conviction, has no idea.

FRANKS: In, 2002, Congress enacted the Born-Alive Infant Protection Act that provides that all federal protections — including from your office, sir — for persons apply to every infant born alive. So will you enforce the infant — the Born-Alive Infant Protection Act as attorney general and will you consider carefully what’s happening in clinics across the country like happened at the clinic that Kermit Gosnell ran?

HOLDER: Well, like you, I share the many of the concerns that you talked about. I’m a father. I have three kids. And I am interestingly married to a woman who is a obstetrician, gynecologist, very accomplished in her field. I have responsibilities as attorney general to enforce all the laws that congress passes.

FRANKS: Have you ever enforced this law even one time?

FRANKS: Will you get back to us on that? Have you ever enforced the born alive infant protection act even one time.

HOLDER: We can examine that, since the law was passed you said in 2002, how many prosecutions there have been under that law.

REP FRANKS: There’s been 18,000 opportunities a year since then approximately. so I’m just wondering if you’ve even enforced once?