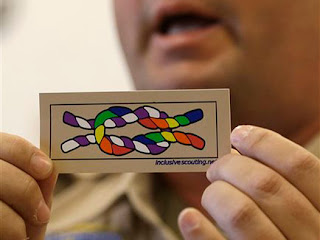 This just changed…The organization, as Justice Rehnquist might express it, just sent a message. It’s the same message that the homosexual activist was trying to force the Scouts to send back in 2000 –  “that the Boy Scouts accepts homosexual conduct as a legitimate form of behavior.”

What the Supreme Court conceded to the BSA only 13 years ago; namely, that the U.S. Constitution gave the Boy Scouts legal protection from homosexual activists destroying their historic moral creed, the BSA cowardly chose to just give away yesterday.

I can't think of how this is anything but a disaster for the Boy Scouts. But then that's how political correctness works. It hates the past and it doesn't care a whit for the future. Stupidly short-sighted, political correctness has no moorings in reason or morality. It simply throws tantrums, yells threats and epithets at anyone who gets in its way, and wreaks an awful havoc on the formerly serene surroundings around it.

With this craven cave-in to immoral pressure, the Boy Scouts of America can no longer boast (and I take the following from the Boy Scout oath and law) of being brave, reverent, trustworthy, morally straight, or doing their duty to God.

The Boy Scouts dropped their compass somewhere in these last 13 years and now...they are sadly, hopelessly lost.
Posted by DH at 1:57 PM