ObamaCare: It's Even Worse Than You Feared 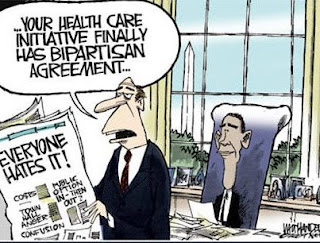 Democrat Joe Klein isn’t the only advocate of Obamacare to finally notice that this hopelessly Byzantine health care “reform” law is an implementation nightmare.

Even the Secretary of Health & Human Services (HHS) has admitted as much. But, whereas Klein correctly assigns responsibility to the President, Commissar Sebelius places the blame on evil Republicans: “It is very difficult when people live in a state where there is a daily declaration, ‘We will not participate in the law.’” Other Democrats have been more candid. Senator Jay Rockefeller, who played an important role in getting the law passed, called Obamacare “so complicated that if it isn’t done right the first time, it will just simply get worse.”

Read more of David Catron's spot on American Spectator article ("The Wheels Come Off Obamacare") right here.
Posted by DH at 9:49 AM