Despite Obama's Screaming About the Sequester, He's Spending Like Crazy on Pet Projects 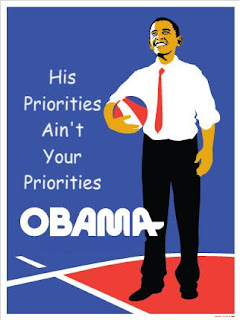 As the world becomes ever more dangerous for the U.S. and her allies (think North Korea, Iran, Afghanistan, Iraq, Egypt, Libya, Russia, China, and the drug cartels), the Obama administration cuts ever more money from the U.S. military.

But all the while, this same administration spends trillions of dollars on the extremely wasteful and socially destructive programs of the welfare state.

And that's not to mention the President's especially egregious spending projects like foreign aid to our enemies; his administration's promotional (and judicial) efforts against marriage, chastity, and the 2nd Amendment; his endless White House parties; his family's lavish vacations; and completely unnecessary things like these (1, 2, 3, 4, 5, 6, 7, 8, 9, 10, etc.).

And, oh yes, this -- and this: "Just over a week after sequestration took effect, the State Department allotted more than $700,000 for gardening at a U.S. Ambassador’s residence in Brussels, Belgium."