The Latest Outrages (Well, Some of 'Em) 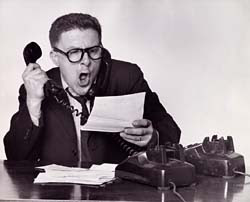 Contemptuous of the nation state, obsessed with expanding its power, the European Union is a vast engine of destruction. In its relentless drive towards political integration, it has ruined our democracy, independence, justice system and borders.

The damage inflicted by the EU on the economies of Europe has been just as great. Brussels promised that the creation of the single currency would usher in a new age of prosperity.

Instead the euro has created a never-ending nightmare.

As dole queues lengthen and living standards fall, debts continue to spiral out of control.

The Eurocrats’ policy of repeated bailouts has only made the problem worse, dragging the whole Eurozone even further towards bankruptcy.

Every member state in the EU is paying a terrible price for this catastrophe. But now, in a dramatic new twist to this doom-laden saga, people living on Cyprus have been told of the arbitrary financial punishment they will suffer as a direct result of the EU’s mismanagement…

The Department of Education’s sequester cuts are taking a brutal toll on federally-funded schools on Native American reservations, but the federal agency still found money to create a new six-figure job promoting “Educational Excellence for African-Americans.”

School officials on reservations across Minnesota have begun making painful cuts to the current budget in anticipation of sequester cuts, adding students to classrooms, slashing course offerings and leaving vacant jobs unfilled, according to the Minneapolis Star-Tribune. At least one reservation is considering shortening the school year to save money...

But in Washington, education funding cuts did not stop the appointment this month of a former elementary school teacher and aide to Rep. Charles Rangel, D-N.Y. to the job of executive director of the White House Initiative on Educational Excellence for African-Americans. David Johns was given the newly created job, where he will be “asked to identify evidence-based best practices to improve African-American student achievement from cradle to career,” according to the Department of Education...

Transportation Security Administration inspectors forced a wounded Marine who lost both of his legs in an IED blast and who was in a wheelchair to remove his prosthetic legs at one point, and at another point to stand painfully on his legs while his wheelchair was examined, according to a complaint a congressman has registered with the TSA.

Rep. Duncan Hunter said in his letter Monday that the Marine, who is still on active duty and showed TSA agents his military identification, was still forced to undergo that scrutiny.

“A TSA office asked the Marine to stand and walk to an alternate area, despite the fact that he physically could not stand or walk on his own. With numerous TSA officers sitting and unwilling to assist, an officer then made him remove his legs, then put them back on, only to advance to a secondary screening location where he was asked again to stand, with extraordinary difficult, while his wheelchair was examined for explosives,” Mr. Hunter said.

He also said TSA officers initially directed the Marine to the wrong line, then made him move lines but made no effort to help him. The incident occurred at Phoenix’s Sky Harbor airport last week, as a group of Marines was returning to San Diego...

You were shocked - SHOCKED, you say - at the very idea that the government of Cyprus would order banks to seize 10% of every bank account and hand the money over the government? Well … excuse me for being rude, but maybe if you had been spending a better part of the last 20 years paying attention to the atrocities that happen with nauseating regularity in Washington, instead of going into an annual swoon over March Madness and/or the Oscars, or blindly tuning in to Entertainment Tonight every evening rather than an actual newscast, you might have seen this money grab coming. I’m no rocket surgeon, and I saw it coming (in America, not Cyprus) and I been warning the listeners to my talk show from 1993 right up until my retirement two months ago.

It’s simple. Taxing your income is simply not enough. The left is coming after your wealth. They’ll be satisfied with some of your retirement funds … for now.

If you haven’t been paying attention to the Cyprus story, here’s your short version: Cyprus is in financial trouble. The Cypriot government is led by communists. Trade unions are fighting austerity programs needed to erase huge deficits. Sound familiar? That is similar to the situation in the United States in more ways that you might imagine. So Cyprus did what every other troubled Eurozone country is doing: went to the Eurozone finance commissioners for a bailout. The commissioners said fine, but as a condition of the bailout Cyprus must levy a 10% tax against the outstanding balance in all depository accounts in Cyprus banks. Call it a tax. Or call it stealing. Either way, every Cypriot depositor loses 10% of their account. The government screws up, the people pay. Again, it sounds so very familiar…

...The idea is alive. House and Senate Democrats are even now toying with various plots to seize retirement and pension plans and pour them into some grand new government operated and controlled pension system .. a system that would be “fair” to everyone. This is just a perfect scenario for Obamian class warfare. “Those rich people are enjoying their fat-cat retirements with the money that should have been used to pay workers a living wage. They steal a comfortable retirement from the middle class and laugh at them from their yachts and private jets.” Yeah … that works. And as you should know, the government would certainly do a better job providing for American’s retirements than could free people interacting in a system of economic liberty.

Cyprus? I hope you enjoy that spectacle as it unfolds. Shake your heads and tsk tsk all you like. Just remember … the Democrat party is watching this episode and celebrating. You’re next.