Obama in Israel: "It's a Hostile Act." 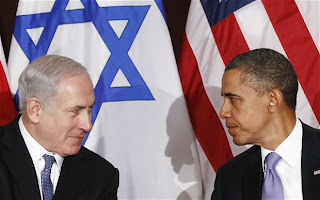 Appearing on WMAL-FM in Washington D.C. Wednesday morning, Caroline Glick, Senior Contributing Editor of the Jerusalem Post said the Israeli people "can't figure out what he's doing here," when asked about the mood in Jerusalem as the President's plane touched down for the first time in his presidency.

"Essentially his goal is to empower the un-electable, incredibly radical left in Israel to put pressure on the Israeli government for whatever concessions he wants it to make to the PLO," said Glick in evaluating the reasons why Obama will be meeting with university students and members of the Palestinian Government during his visit.

When asked about how the installment of Chuck Hagel as the Secretary of Defense was received by the Israeli people, Glick said, "It's a hostile act."
Posted by DH at 9:58 AM