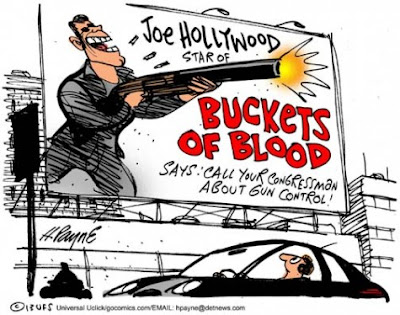 A new Media Research Center study reviewed a sample of 216 gun-policy stories on ABC, CBS and NBC in the first month after Newtown, from the Dec. 14 shooting through the morning after President Obama's Feb. 16 speech pushing new gun control proposals. The number is instructive. That's not 216 stories in a month on Newtown. That's 216 stories just about the policy "solution" -- more gun control.

There are zero stories tilting toward a "solution" of curbing violence in TV and movies. That's because the TV networks show violent scenes nightly and are owned by companies with movie studios that profit from violent scenes. Try finding the word "violence" next to "movies" or "television" in a post-Newtown story on the TV networks where it isn't a casual afterthought.

The First Amendment is treated as sacred; the Second Amendment as profane.

As one might suspect, stories advocating more gun control dominated. But "outnumbered" is an understatement. They smothered stories tilting against gun control by 99 to 12, or more than 8 to 1.

It's easy to arrive at that results when anti-gun sound bites were aired almost twice as frequently as gun rights sound bites (228 to 134). When the Big Three network "news" operations sought out guests for interviews, the tilt was 26 to 7…

After Newtown, the networks again demonstrated that there's no story on which they can't dramatically stack the deck. Liberal news stories lead to liberal legislation. They know it; and relish it.
Posted by DH at 9:06 AM