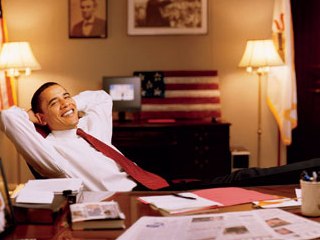 At a GM plant in Warren, Ohio on September 15, 2009, Barack Obama boldly promised the employees, "But I want you all to know, I will not rest until anybody who's looking for a job can find one -- and I'm not talking about just any job, but good jobs that give every American decent wages and decent benefits and a fair shot at the American Dream."

That promise drew enthusiastic applause and shouts of hurrah -- well, from the adoring press corps anyhow.

Obama went on in subsequent speeches to make the same pledge. "I will not rest until every American who wants a job has a job. A good job."

He won't rest, huh? How's that promise worked out?

Well,  President Obama has had 83 vacation days overall and at least 57 vacation days since that much-heralded pledge. That's quite a lot of rest, don't you think?

And, of course, those vacation days don't include the President's restful hours spent in lavish parties, being entertained by Hollywood celebrities at the White House, and zipping around Air Force One to those innumerable shindigs where extremely rich people give him adulation, cash, and shout-outs to move even faster in the remaking of the Republic.

And that folks, is the "rest" of that story.