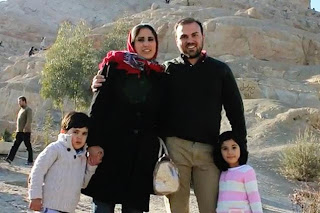 An Iranian-born American pastor that was recently sentenced to eight years in prison in Iran for planting house churches across the country states that he is enduring “horrific pressures” to deny his Christian faith.

As previously reported, 32-year-old Saeed Abedini of Idaho was taken into custody last September while visiting his homeland of Iran as he had returned to spend time with his parents and to continue his charity work of building an orphanage. He has taken a number of trips to Iran since moving to America in 2005.

According to his wife, Naghmeh, who remains in the U.S. along with the couple’s two children, Abedini was apprehended just before he was about to board a plane to return to the states. He had taken a brief excursion to another country, and was stopped at the Turkey-Iran border upon his re-entry. The Iranian Revolutionary Guard seized Abedini’s passport, subjected him to interrogation and placed him on house arrest for several weeks.

On September 26th, officials arrested Abedini at his parents’ house and booked him at the notorious Evin prison, which is known for its brutal conditions. Last month, he was sentenced to eight years in prison for allegedly threatening the national security of Iran by planting house churches, and for attempting to turn youth in the nation away from Islam and toward Christianity. The charges stem from activities that are approximately a decade old, when Abedini was involved in establishing scores of Christian churches across the country. It is estimated that he had a role in founding approximately 100 house churches, which yielded 2,000 members combined.

This week, the American Center for Law and Justice (ACLJ), which is fighting for Abedini’s release, provided the text of a letter that he wrote to his family from Evin prison.

“There are those who are enemies of the living Bible and do not want to hear,” Abedini said. “They are trying to put me under such horrific pressures (that are sometimes unbearable) so that they can show me that my faith is empty and not real. … They are only waiting for one thing … for me to deny Christ.”

He explained that he is being tortured by various “groups, the psychological warfare, a year of not seeing my family, physical violence, actions committed to humiliate me, insults, being mocked, being confronted with extremists in the prison who create another prison within the prison walls, and the death threats.”

Abedini said that the conditions are “so very difficult that my eyes get blurry, my body does not have the strength to walk, and my steps become very weak and shaky.”

“This is post conviction,” commented Jordan Sekulow, the executive director of the ACLJ. “This is about life, and the message is you will be treated this way until you become a Muslim.”

“This is only second time we’ve heard from him, but this makes sense in light of how Christians are being treated in Iran,” he added. “He can’t communicate this message every day. It’s our job to get this important message out to everyone.”

Abedini not only spoke of his own plight in Evin prison in his correspondence, however, but like the Apostle Paul, concluded his letter with a word of exhortation for the Body of Christ.

“This is my message for the church: Stay strong for His glory. He will come back soon! Be with God and give your best efforts for His kingdom.”

What can you do? Pray for Saeed and his family. Urge others to pray for them and for the thousands of other Christians around the world who are also being persecuted for their loyalty to Jesus Christ.  And contact the temporal powers.

For instance, write your Senators and Congressmen asking them to step up the pressure on Iran to free Saeed. (Contact info right here.) Write new Secretary of State John Kerry with the same appeal. (Contact info below.) And go ahead and write Iran's diplomatic minister to the United States. Ask him to please inform his government of your simple appeal to demonstrate the spirit of both justice and mercy by immediately releasing Saeed Abedini.