This Is What It's Come To -- Abortion by Vending Machine? 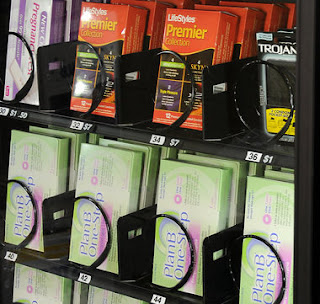 Here's the Associated Press report from last week as printed in the Washington Post.

The U.S. Food and Drug Administration won't take any regulatory action over a vending machine at a Pennsylvania college that dispenses the morning-after pill.

The pill is available for $25 at a health center vending machine that's accessible to students and university employees. That raised questions about how accessible emergency contraception should be.

The vending machine at the school of about 8,300 students provides the Plan B One Step emergency contraceptive along with condoms, decongestants and pregnancy tests. Administrators said the idea for the machine came from a student survey and was endorsed by the student government.
Posted by DH at 12:06 PM