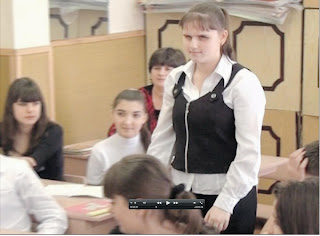 A blind Russian high-schooler's impassioned criticism of the ban on adoption by Americans has added a new and compelling voice to the chorus of condemnation of the law.

Since her Jan. 6 blog entry complaining about the ban, written as an open letter to President Vladimir Putin, Natasha Pisarenko has attracted the wide attention of Russian media and, she fears, drawn the disapproving notice of authorities.

The adoption ban, which went into effect Jan. 1, is one of the most controversial moves of the first year of Putin's third term in the Kremlin. It was enacted as part of a bill retaliating for a new U.S. law that calls for sanctions against Russians deemed to be human rights violators. But critics say it punishes innocent children by denying them a chance of escaping Russia's often-dismal orphanages…

Pisarenko wrote sarcastically that by signing the law, Putin was "saving children from American evil" and said that Russians rarely adopt disabled children because the country's medical system is backward and can't take care of them.

"They die because Russia doesn't have modern medicine," she wrote.

Pisarenko, blind from birth, writes that she has painful personal experience with Russia's medical inadequacy. She says that although her father detected her blindness within days of her birth, Russian doctors were unable to diagnose it for months. But, she says, she received precise diagnosis and the hope of treatment from German and American doctors.

"For Russian doctors, I am a child with an illness of unknown etiology ... but in Germany and America I am a patient whose sight the doctors are trying to restore," she wrote...

Putin's spokesman Dmitry Peskov was quoted by a local radio station as saying "Of course we will pay attention to such a statement. "This girl is well known to us, she's known by the regional authorities and by the health ministry," he said.

Pisarenko and her parents have challenged authorities before, according to Russian media, notably when her parents agitated to have her educated at a regular school in her native Rostov-on-Don, rather than sending her away to a school for the blind. She's now in 10th grade, one year short of graduation under the Russian system.

In a later post, she expressed worry that her letter would cause her parents to be called in for questioning by regional authorities.

When The Associated Press on Monday asked her father, Nikolai, if Natasha could be interviewed, he said he had been ordered not to comment to news media, but declined to say who issued the order.

"Probably, I will regret that I wrote what I think," Natasha wrote in her blog on Saturday.

Related stories (and excellent ones, at that) are: "Russian Orphan Adoption Ban Protests May Be Harbingers of Instability" by Ariel Cohen at The Foundry over at The Heritage Foundation; "The Blind Girl vs. Putin: A Plea for Russia’s Handicapped Orphans" by Simon Shuster at TIME Magazine; "Putin adoption ban a 'death warrant'" by Tom Dalton at The Salem News.

Let's do what we can to stand up for Natasha and the cause she so eloquently and bravely argued. Pray for her and her family to be spared the anger of an embarrassed tyrant. And pray for Vladimir Putin to reverse his cruel and vindictive anti-adoption law.

In addition, you may want to contact one of the 5 Russian consulates in the United States and ask them to pass along to Mr. Putin your opinions of his anti-adoption law. In my case, the consulate with "jurisdiction" over Nebraska is...

And here's my simple appeal:

Will you please pass on to Ambassador Sergey I. Kislyak and President Vladimir Putin the strong desires of the American people -- indeed, of people all around the world who love children, cherish freedom, and advocate humane standards of medical and social care for those in need -- that you please remove the ban on U.S. adoptions of Russian children.

Please act in the cause of genuine liberality, understanding and justice by removing this ban as soon as possible. Please do what would ennoble Russia in the eyes of the world. Please do the right thing for the kids.

Thank you for registering my concerns and passing them along.