Dear Phil Mickelson, How About Moving to Nebraska? 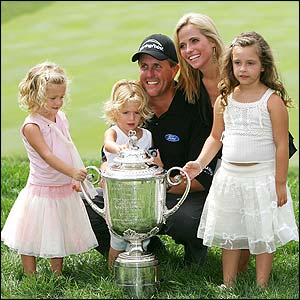 I just read about the possible shake-up in your life in response to the latest hike of taxes coming your way. And you're right in believing that a tax rate of 63% is ludicrous, dangerous and unacceptable.

Of course, President Obama, the Democrat-controlled U.S. Senate, California Governor Brown, and the entire Democrat Party believe differently. In fact, they will not stop at 63%. They are truly insatiable when it comes to confiscating the wealth of productive citizens. They want (and unless stopped, they will take) more and more and more.

I don't know what you're contemplating to protect your family from these government raiders. You were teasingly obscure in your remarks this weekend. You may be thinking of some kind of semi-retirement like Steve Stricker. You may be considering finding some kind of tax shelters to be able to pass on to your kids what will otherwise be taken by government clerks. Perhaps you are even considering taking a more active role in fighting the corrupt and counter-productive policies of Democrat government…as in setting up a PAC or running for political office yourself. I don't know. Whatever is on your mind, though, I'd like to jump in with one important suggestion.

Get out of California! Every productive American is being ground down by unjust, penalizing taxes. But living in deep blue states like California will cost you a lot more and a lot faster than if your business and property was headquartered in say, Texas or Nebraska. And though Texas has the sun I know you love, there's an awful lot to be said for Nebraska too. We have (right now) a relatively responsive government, low tax rates and cost of living, terrific sports fans, and the best steaks in the country. And, most important, the family values you've demonstrated as being very important in your life are deeply treasured here in the Cornhusker State.

So please consider the invitation a sincere (and reasonable) one. Come live the Good Life in Nebraska.