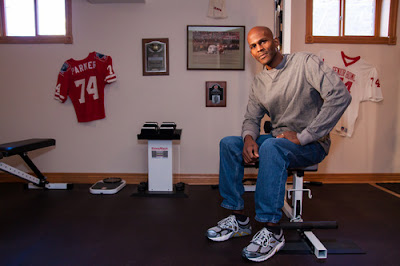 Stan Parker has had a remarkable career. He won his initial fame as an outstanding athlete at Bellevue East High School and then with the University of Nebraska football team. But his years afterward are the most impressive as Stan has proved a devoted husband, dad and Christian servant -- first with the Fellowship of Christian Athletes and then with Mission Nebraska and MyBridge Radio.

In this interesting article, Randy York discusses with Stan one of the most memorable moments from his NU football days.

Let’s rewind the clock back to the night before that 1986 game when Nebraska’s and Oklahoma’s teams happened to show up at the same movie theater in downtown Lincoln. “Going into the theater, I didn’t realize I was about to experience a ‘chance’ event that would set up what would happen the next day in the game. I looked across the lobby and saw (OU running back) Spencer Tillman. Spencer had written a letter to (Nebraska I-back) Doug Dubose after he pulled his hamstring and couldn’t play, so I went over to Spencer that night in the lobby of the theater to tell him how much I appreciated him doing that.”

In addition to hearing about Tillman’s skill as a running back, Parker had heard they shared a common faith in Christ. “We left the movie theater that night and went down the street and sat in fellowship for two hours at a yogurt shop,” recalled Parker, who is a longtime ministry partner with Ron Brown, Nebraska’s running backs coach.

Parker never will forget when he and Tillman, as captains, met for the coin toss, after which they were immediately joined by a small group of teammates to kneel in the center of the field in honor of the God that blessed them with their ability. “In the midst of all the hype and all the excitement, in those moments we experienced something even greater than the game itself,” Parker reflected.