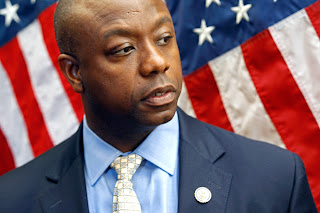 Over at Publius' Forum, Warner Todd Huston reports on the non-reports regarding Senator Tim Scott.

On Monday, South Carolina Governor Nikki Haley announced that she was appointing U.S. Congressman Tim Scott to the U.S. Senate seat being vacated by Jim DeMint. When he is sworn in on January 3, Scott will be the lone African American of either party in the Senate but this historic news didn’t seem to interest ABC or CBS as neither mentioned the news that night...

One would think that the “diversity” of this story alone would be of interest to the big networks. After all, we have a female Governor who is the daughter of Sikh immigrants appointing the only African American to the Senate. We also have a Senate seat that is famed for having once been occupied by Strom Thurmond, a one-time Dixiecrat, segregationist turned repentant Republican. And we have the first black Senator from a southern state since Blanche Bruce of Mississippi in 1881. This is almost “diversity” overload.

Perhaps one mitigating factor for the old networks is that all of this “diversity” was wrought by Republicans?

To its credit, NBC did spend some time on this historic appointment. A whole 24 seconds...
Posted by DH at 7:54 AM