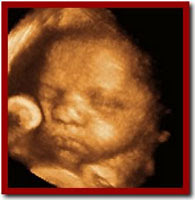 When the Sonogram bill was being debated in the Texas legislature last year, the abortion lobby claimed that the measure was an unnecessary intrusion and that it would not impact women’s decisions to have an abortion.

However, one abortion advocate has recently admitted that the Sonogram Law is, indeed, having an impact for Life. Amy Hagstrom Miller, CEO of Whole Woman’s Health — one of Texas’ largest abortion chains — told the Texas Tribune last week that abortions at her five centers have declined since the law took effect in October 2011...

Elizabeth Graham, Director of Texas Right to Life, is not surprised by Hagstrom Miller’s admission. “Looking through the window to the womb, women recognize the child growing within them is not an inconsequential blob of tissue. When equipped with facts and information about both pregnancy and abortion, women are empowered to choose Life over abortion. If abortion centers are seeing a decrease in their business, that means women are turning to legitimate health care agencies for services.”

("Activist Admits Texas Ultrasound Saving Babies From Abortion" by Rachel Bohannon at LifeNews.com.)
Posted by DH at 7:16 AM