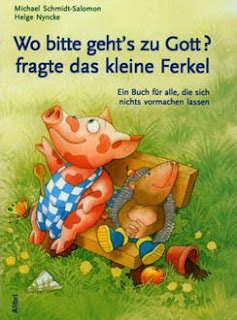 "I think that God doesn't even exist. And if He does, than he definitely doesn't live in [a synagogue, cathedral or mosque]."

Hmm. Is this Richard Dawkins talking?

No, it's a mentoring hedgehog, warning a young friend about the dangers represented by religion in Michael Schmidt-Salomon's 20-page German children's book, (English translation)"How Do I Get to God, Asked the Small Piglet."

Published last October by Alibri, the book has been criticized as "dangerous for children" by the German Family Ministry but Gunnar Schedel, the publishing firm's boss, defends it as providing a needed service for the kids of atheists and others who are critical of organized religion.

"All three religions are treated equally in the book," he said. "No one is negatively singled out."

That, it seems, the ministry agrees with -- for all three are roundly trashed as being rooted in mindlessness, intolerance, coercion, even violence.

"The three large religions of the world, Christianity, Islam and Judaism, are slurred in the book," the ministry wrote in a December memo. "The distinctive characteristics of each religion are made ridiculous."

But to the author, it's all about freedom of thought, a freedom that he believes will undoubtedly lead to atheism. "Children also have a right to enlightenment. They should not be left defenseless to the scientifically untenable and ethically problematic stories of religion."

Daddy, read me a bedtime story, please. Oh no -- not the one about the cute and cuddly forest creatures dissin' God and demanding an end to the hierarchical oppression of free-thinkers. Please Daddy, can't I just have Sleeping Beauty or Winnie the Pooh once in awhile?