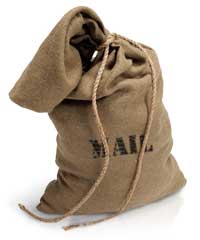 * A Project Veritas sting operation caught (on video tape) the field director for Virginia Democratic Rep. Jim Moran (his own son Patrick) in a jocular conversation about how to engage in vote fraud. Indeed, Moran advises James O'Keefe (who is playing the part of a Moran supporter lining up fake ballots) on how to best get away with the crime. Was the result a juicy news story covered by all the networks and the other mainstream press? Uh, no. But the damning tape did force the younger Moran to resign for what the campaign referred to as "clearly an error in judgment." In other words, he was wrong not so much for the despicable, treasonous crime of aiding in vote fraud as simply getting caught on tape doing so.

* Martin Sheen may be a favorite of liberals for his roles in "The West Wing," "Apocalypse Now," "Gandhi" and for being the father of the loutish libertine, Charlie Sheen, but his views on the sanctity of life have remained remarkably conservative. Here's a report that suggests why.

* Monday night's presidential debate was supposed to focus on foreign policy, but several domestic items were shoved in by the candidates including one which was one of special relevance to Michigan voters. "For the first time, the two candidates went head-to-head on the Government Motors details — and Obama got it wrong. Badly wrong. Damn-the-facts-I’m-clinging-to-my-talking-points wrong." Here's the story from Henry Payne at NRO.

* "Lobbyists for the nation’s largest labor unions have had the run of the White House during its occupancy by a president who pledged from his first day in office to curb political influence." I guess, "run of the White House." The official logs (which do not list the meetings in the coffee shop nearby that Obama aides have favored) show nearly 500 visits by union lobbyists through last June.

DNC Chairwoman Debbie Wasserman Schultz seems to reside in a different reality than the rest of us. After the debate last night she said: "What I was surprised about Greta, during the entire section of the debate on the Middle East, Mitt Romney didn’t bring up Israel once and I think it just shows he isn’t committed to Israel as he says he is and has really only used the issue as a political opportunity."

The only problem for Wasserman Schultz is that a mere glance at the transcript of last night’s debate shows that Romney mentioned Israel eleven times. Here are three examples of Mitt Romney expressing his support for Israel: "We also have to stand by our allies, I think the tension that has existed between Israel and the United States is very unfortunate...When I am president of the United States, we will stand by Israel. And if Israel is attacked, we have their back...The turmoil with Israel, I mean the president received a letter from 38 Democratic senators saying the tension with Israel was a real problem.

Debbie Wasserman Schultz’s attempt to spin the president’s abysmal record on Israel is unbecoming, and let us hope that Florida’s Jewish community will take note of Mitt Romney’s actual statements in the debate in their state.

* The "brave new world" of science gets more bizarre and immoral by the day. Here's a story about Oregon researchers creating human embryos using genes from one man and two women.

* Want another reason to vote for Mitt Romney? If Barack Obama is re-elected, Hillary Clinton now says she might renege on her promise to only serve one term and stay on for awhile as Secretary of State.

* President Barack Obama came into office in 2009 riding a wave of hope and change. Unfortunately, he has not delivered on the nation's yearning for change nor on the specific promises he made to fix what is broken. The president is asking the country to be patient, but his plan isn't producing results that would merit more patience, and the president hasn't spelled out what he would do differently in a second term.

Hope and change are still what Americans are seeking. This time, Republican challenger and Michigan native Mitt Romney offers the best hope of changing the nation's fate...

* Here's one thing we can be sure of about the Benghazi affair: almost everything we've been told since by the mainstream media is a lie, invariably one designed to shore up the creaky and desperate Obama administration.

Consider how quickly the story was spun by Obama's amen corner in the liberal MSM. It should, according to any objective news sense, have been a shocking tale of how a woefully unprotected ambassador was murdered in cold blood by Al Qaeda affiliates. Instead, it almost immediately became – of all things – an excuse to demonstrate why Mitt Romney was unfit to be president...

Instead, the post-Benghazi media coverage quickly became an exercise in finger pointing designed to show that it was anyone's fault but the Obama administration's. First, the attack on Romney. Then, the attempts to deflect attention on to the poor sap who made the anti-Islam hate video (which supposedly – though not at all in fact – provoked the fatal assault in the Benghazi consulate) – as if in some way to persuade us all that, hey, the lynching of the ambassador and his staff/protection kind of wasn't that bad because, hey, we sort of invited it…

This is a big deal.

The Obama administration's duplicity and mendacity is nothing those of us who've been observing, aghast, his disastrous foreign policy approaches since at least his infamous Cairo surrender monkey speech couldn't have predicted. And while it's nice to see his chickens coming home to roost and encouraging to realise that his chances of becoming a second-term president are diminishing by the minute, it's hardly a situation you might call – hmm what's the word? Oh yeah – "optimal" for the grieving relatives of the four men who died needlessly in order to satisfy the President's wishful thinking that the Al Qaeda threat is diminishing and that there's nothing wrong with the Middle East's intractable problems that can't be solved with a few emollient words, beautiful lies and maybe the occasional NASA-endorsed outreach programme….

From "Benghazi and Obama: the media is trying to shore up this desperate administration" by James Delingpole at the Telegraph.

Nine people have been charged with voter fraud in a district in Arkansas, after a scheme was uncovered in which half-pint bottles of vodka were used to buy votes.

Three of those charged have pleaded guilty, including Democratic State Representative Hudson Hallum who has since resigned. Hallum had allegedly told a local city councilman — who is now a co-defendant — that they “need to use that black limo and buy a couple of cases of some cheap vodka and whiskey to get people to vote.”

In addition to these alcohol-fueled voter incentives, this scheme involved absentee ballot fraud and destroying absentee votes for opponents.

“I mean, I guess I always knew, all along, it was wrong,” said Hallum in an interview. “But at first I really didn’t think it was that big a deal, because I’d always heard that’s what everybody did.”
Posted by DH at 10:26 AM