Those 5.2 Million Jobs Obama Created? Not Even Close. 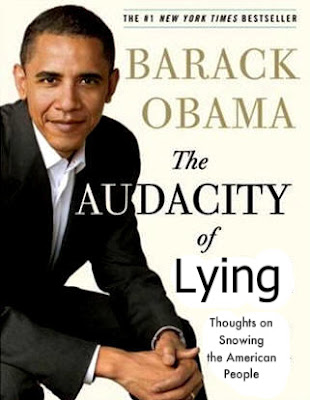 The effects of sheer incompetence and an unpopular political philosophy (i.e. unfair wealth redistribution) are awfully ugly. So, why not lie big and lie often -- and then depend on the mainstream media to help you hide the truth from public scrutiny?

President Obama has lately been touting the claim that he's created 5.2 million new jobs as President. His fantastic boast is featured in a new TV ad. But FactCheck.org says not so fast. Those claims are "inflated," to say the least…

FactCheck goes on to note that far from an actual gain of 5.2 million, once earlier losses are removed, Obama has in fact only realized some 967,000 jobs, which includes a credit of 453,000 private-sector jobs which will be added through the Bureau of Labor Statistics (BLS) benchmarking process...
(Warner Todd Huston, Breitbart.com)
Posted by DH at 9:52 AM