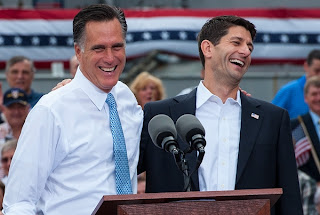 Here's a few excerpts from the editorials of newspapers recently endorsing Mitt Romney for President.

...Barack Obama was in Manchester on Thursday. When he came to Veterans Park in 2008, he sold “hope and change.” He was uplifting, inspiring. Last week, that was gone. In its place was the negativity, the deception, the nastiness that Obama once said he wanted to remove from politics.

Obama offered New Hampshire nothing but bitterness and envy. He attacked Romney with a litany of mischaracterizations and deliberate falsehoods. It was far from the uplifting message Obama delivered four years ago. But four years ago Obama did not have an indefensible record...

What Obama offers America is a fantasy. Sputtering economies are not sparked back to life by government-directed spending on industries hand-chosen by politicians. They are revived by unleashing the energy and creativity of the American people. The key difference between Mitt Romney and Barack Obama is that Romney understands that crucial economic truth; Barack Obama does not…

While Obama offers rhetoric and pipe dreams, Romney offers a real plan to bring the economy back to life. It is not the George W. Bush plan. Bush spent more than he took in. Obama, who doubled Bush’s level of deficit spending, accuses Romney of wanting to return to Bush-type deficit spending. It is not true, but if it were, that would be an improvement over the last four years.

Obama had four years — half of them with a Democratic majority in Congress — to try his way. Romney offers a better way, a realistic way, to restore American prosperity. We tried the fantasy. It did not work. Now it is time to stop dreaming and start growing again.

After nearly four years of economic stagnation, massive unemployment, record-setting debt and government intrusions into the economy that have paralyzed the private sector, the United States needs a new direction. For this reason, The Dispatch urges voters to choose Republican Mitt Romney for president in the Nov. 6 election…

In 2008, Americans made a leap of faith when they elevated the inexperienced Obama to the White House. That faith was not rewarded. This time, voters should place their hopes for change in experience, by electing Romney.

...Under President Barack Obama's liberal and inconsistent leadership, the country has limped along, barely a step ahead of another recession. The deficit soared, government expanded and the prospects of more regulations and taxes chilled corporate investment.

Just as we warned four years ago, this master orator has pushed "America toward a European-style social democracy." We don't question Obama's motives. The president sincerely believes in the inviolable ability of the federal government to make all things right. But Americans should see that this top-down approach doesn't work.

Romney, in contrast, would capitalize on individuals' ingenuity, not Washington directives...

The choice is yours. Our choice is the latter. And that’s why we enthusiastically endorse Republican Mitt Romney for president of the United States...

The Chronicle's backing of Barack Obama in 2008 broke a 44-year string of endorsing Republican candidates for president. Like so many others, we were captivated by the Illinois senator's soaring rhetoric and energized by his promise to move American politics beyond partisan gridlock and into an era of hope and change.

It hasn't happened. Four years later, President Obama's deeds have failed to match his words, much less his specific vows to cut the national debt by half and bring the nation's unemployment rate to 6 percent. As Texans, it is a particular vexation that this president's attitude toward the interests of our state has occasionally bordered on contempt, particularly in decisions relating to the NASA budget and the energy sector. The hurtful symbol of this attitude of insensitivity to Texans' feelings was the administration's choice to deny Space City's bid to become home to one of the retired space shuttles.

We do not believe four more years on the same plodding course toward economic recovery is the best path forward for Texas or the nation. And so we endorse the Republican team, Mitt Romney and Paul Ryan, in the belief that they can do better by Texas and the nation…

(Another generally Democrat newspaper who endorsed Barack Obama in 2008.)

Given the final two minutes to speak during Tuesday's second presidential debate, President Barack Obama quickly spotlighted what he said was the key distinction between his re-election candidacy and the campaign of former Massachusetts Gov. Mitt Romney. "There's a fundamentally different vision about how we move our country forward," Obama said.

He's right, and "fundamentally different" is what the nation needs. For that reason, Romney should be elected president on Nov. 6. The slow U.S. economy and its discouragingly high unemployment overshadow the other important issues in this election. Economic recovery must be spurred to a faster pace, and a change to Romney's leadership would do that...
Posted by DH at 11:09 AM