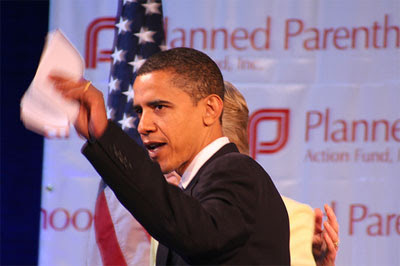 Following Barack Obama's lies at the 2nd debate last Tuesday night, it's appropriate to repeat this post from September 7th.

This is most definitely pass around material.

A deliberate effort is underway to rebrand Planned Parenthood as an integral provider of healthcare services, without which untold millions of women would lack basic medical care, or so the story goes. Thus, whenever any effort is made to cut off funding for the nation’s largest abortion provider and stalwart financier of leftist politicians, we’re told there is a “war on women.”

But it’s not a “war on women” when a state simply places a higher priority on funds for true health services that Planned Parenthood doesn’t perform Take, for example, mammograms.

Yes, mammograms. Perhaps there is no greater falsehood than the deceitful, and largely successful, attempt to persuade Americans that Planned Parenthood performs mammograms. It doesn’t.

When the Komen Foundation announced in February that it would no longer provide grants to Planned Parenthood—partly due to the fact that Planned Parenthood does not directly provide mammograms - its ideological and political supporters sprang into action. They decried Komen’s decision to eliminate funding for this imagined provider of mammograms. Planned Parenthood’s Executive Director, Cecile Richards, , made the claim. So did President Obama. And an unsuspecting public was led to believe that such bold claims, by people who should know, must be true.

No matter that phone calls to Planned Parenthood from Live Action demonstrated clearly that this was not the case: Obama had spoken. And the president’s campaign together with Planned Parenthood’s ads continue to beat this drum (almost as if they were coordinated), building off the earlier confusion to frighten voters about the prospect of a Romney administration cutting off funding for Planned Parenthood’s “cancer screenings.”

Anytime someone suggests to you that Planned Parenthood performs mammograms, I encourage you to share with them this letter from the U.S. Department of Health and Human Services demonstrating that it’s untrue. [The link to the Pdf copy of the government's letter can be found in the article itself -- follow the link given above.] No Planned Parenthood clinic in the country is authorized to perform mammograms. If they are nevertheless performing them, they are violating federal law.

Under the federal Mammogram Quality Standards Act, administered by HHS, “[n]o facility may conduct an examination or procedure…involving mammography” without a certification from the U.S. Food and Drug Administration. While a 2004 amendment to this law permits some states to also authorize mammography facilities, these certificates are still issued under the authority of the FDA, and the FDA records all certificates and investigates facilities holding such certifications. In short, there is no uncertainty: if Planned Parenthood could perform mammograms, the FDA (and HHS) would know it.

Some Planned Parenthood clinics may provide much less effective manual breast exams. And some encourage women to perform self-exams, which breast cancer organizations like the Komen Foundation actually discourage as counterproductive to women’s health. And, in some cases, Planned Parenthood employees may tell a woman she should go get a mammogram from one of the public facilities that could have provided one to her in the first place. But in order to get a mammogram, a woman needs to go to someplace other than Planned Parenthood.

Planned Parenthood doesn’t perform mammograms. And President Obama’s own administration agrees. Perhaps with this lie exposed, we can now have a serious discussion about the hundreds of millions of dollars in taxpayer subsidies for Planned Parenthood and its political allies.