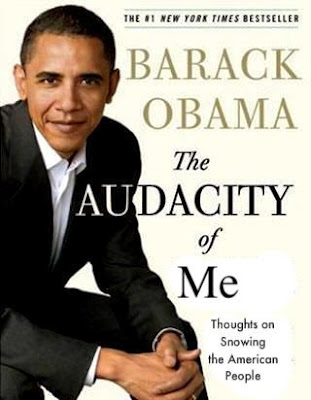 "Obama Is Right" by William L. Gensert over at American Thinker is a must read.

After all the suffering America has experienced while he was busy getting the "policy right," there is no one left who still believes in Barack's brilliance.  After watching him in two debates sans teleprompter, his reputation as humanity's greatest orator has evaporated along with his lead in the polls.

From the 23 million Americans unemployed or underemployed and the 46 million people now on food stamps, to the decline in workforce participation and the explosion of people on disability, many now realize the fallacy of his reputedly deft decision-making skills.  His claim in the last debate of having created 5 million jobs rings hollow to an electorate seeing fewer people working today than when Obama took office.

Yet, the story he insists on telling America is that he saved us.

He maintains that his near-trillion-dollar stimulus -- ultimately a reward to political backers and crony capitalist buddies -- avoided a great depression, despite the worst economic recovery since WWII and 42 months of 8%-plus unemployment.  Remember "saved or created"?

We are now supposed to believe that 1.3% economic growth and 7.8% unemployment is the "new normal," and it is only ungrateful bastards who refuse to see this as success.

He also saved the auto industry, claiming in the second debate a million jobs saved -- a nice trick, since as of September 2012, there were only 778,400 people working in the manufacture of motor vehicles and parts in the United States.

Why he didn't claim 2 million or 10 million jobs "saved or created," I will never know.  He could have used any figure.  He is after all, telling a story.  Why not make it a good one -- nay, a great one?…

His idea of bipartisanism was to offer the opposition the opportunity to do as they were told.  And when they refused, he labeled them as obstructionists.  His deeply unpopular ObamaCare passed without a single Republican vote, and the last two budgets he proposed didn't get any votes at all.  How's that for reaching across the aisle?

He sold himself to America as a constitutional scholar.  Yet when the minutiae of governing -- proposing and crafting legislation and lobbying for its passage -- got too difficult, he hit the links and ruled by executive order…

Disingenuously, he portrays himself as the "Energy President," while his policy has always been none of the above, unless it is wind or solar, which he calls the energy of the future when it is truly the energy of the past.  With Barack, it is always yesterday's answers to today's problems.  That's why he likes high-speed rail so much.

He is singlehandedly destroying the coal industry in America, while restricting drilling for oil in the Gulf and off our shores as well as on all public lands.  The EPA is now in the process of formulating rules to regulate "fracking" nationwide.  It's a safe bet that any new regulations won't increase production.

Yet, he has no problem taking credit for the boom in fossil-fuel development happening on private land -- something he couldn't stop.  Maybe next term he will be more successful.

Every other month, Secretary of the Interior Ken Salazar withdraws more land from potential energy development.  Most recently, he put nearly half of the 23-million-acre National Petroleum Reserve on Alaska's North Slope off-limits, restricting development to 12 million acres with potentially 549 million barrels of oil.

In 2002, the Reserve, designated almost a century ago by Congress for energy development, was thought to hold 9 billion barrels of oil.  Mysteriously, in 2010, this estimate was reduced to 900 million barrels.  People notice when you pull billions of barrels of oil from potential production.  Change the story by redefining the estimate, and the news item goes from page 1 to page 19 when the administration puts America's resources off-limits.

...And that is the essence of the Barack Obama presidency.  It is a story of "redefinition," failure redefined as success, weakness portrayed as strength and a lack of ideas as transformational leadership.  He has redefined being responsible by using the qualifier "to some degree."  This way, he has the luxury of taking credit for all the good while blaming others for all the bad...
Posted by DH at 10:06 AM