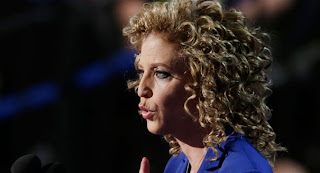 The combination of incompetence and raw arrogance exhibited by modern liberals, especially the people involved in the Obama administration, is absolutely stunning. Here's a dramatic case in point, "The Remarkable, Unfathomable Ignorance of Debbie Wasserman Schultz" by Glenn Greenwald in the British newspaper, The Guardian. In the story, Greenwald describes not only how the "chairchick" of the Democratic National Committee is completely unaware of one of the biggest stories of the Obama years…but who then makes her stone-cold stupidity a matter of aloof pride.

You gotta' check this one out.

On 29 May 2012, the New York Times published a remarkable 6,000-word story on its front page about what it termed President Obama's "kill list". It detailed the president's personal role in deciding which individuals will end up being targeted for assassination by the CIA based on Obama's secret, unchecked decree that they are "terrorists" and deserve to die...

The Times "kill list" story made a huge impact and was widely discussed and condemned by media figures, politicians, analysts, and commentators…[But] That Obama has a "kill list" has been known since January, 2010, and has been widely reported and discussed in every major American newspaper since April 2010...The Attorney General, Eric Holder, gave a major speech defending it.

But Debbie Wasserman Schultz, the Democratic Congresswoman from Florida and the Chairwoman of the Democratic National Committee, does not know about any of this. She has never heard of any of it. She has managed to remain completely ignorant about the fact that President Obama has asserted and exercised the power to secretly place human beings, including US citizens, on his "kill list" and then order the CIA to extinguish their lives.

Just marvel at this stunning, completely inexcusable two-minute display of wholesale ignorance by this elected official and DNC chair. Here she is after the second presidential debate being asked by Luke Rudkowski of We Are Change about the "kill list" and whether Romney should be trusted with this power. She doesn't defend the "kill list". She doesn't criticize it. She makes clear that she has never heard of it and then contemptuously treats Rudkowski like he is some sort of frivolous joke for thinking that it is real:

Anyone who observes politics closely has a very low bar of expectations. It's almost inevitable to become cynical - even jaded - about just how inept and inane top Washington officials are. Still, even processing this through those lowly standards, I just find this staggering. Staggering and repellent. This is an elected official in Congress, the body that the Constitution designed to impose checks on the president's abuses of power, and she does not have the foggiest idea what is happening in the White House, and obviously does not care in the slightest, because the person doing it is part of the party she leads.

One expects corrupt partisan loyalty from people like Wasserman Schultz, eager to excuse anything and everything a Democratic president does. That's a total abdication of her duty as a member of Congress, but that's par for the course. But one does not expect this level of ignorance, the ability to stay entirely unaware of one of the most extremist powers a president has claimed in US history, trumpeted on the front-page of the New York Times and virtually everywhere else.
Posted by DH at 10:30 AM