Oh, You Can Be a Christian; You Just Can't Show It. 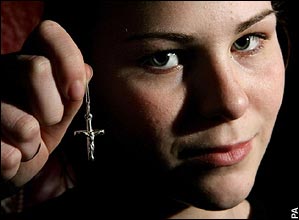 "Britain is a very tolerant country but we seem to be more tolerant to some groups than others and at the moment we’re not at all tolerant to Christians. You can have faith but not demonstrate it.”

Bruno Waterfield's article in the Telegraph describes the double standard operating in Great Britain when it comes to protecting religious rights. He explains how the British government (despite the previous promises of Prime Minister David Cameron to protect religious expression) has taken a position against Christians being able to express anything about their faith (even wearing a cross) in the workplace.

But to the government, that's not discrimination nor is it a denial of religious freedom because, after all: 1) You can still be a Christian. You just can't let anyone know it. Or 2) You're free to go get another less-conspicuous job.