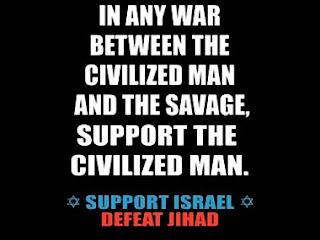 Mona Eltahawy, a journalist who is frequently featured on CNN and MSNBC talk shows, is bothered by a pro-Israel sign that is posted in a NYC subway.

So, in an act of self-righteousness and intolerance that is illustrative of the same thing we see daily from liberals in the media, education establishment, the unions, the abortion lobby, and government bureaucracies, Ms. Eltahawy tries to obliterate the sign's message…because she doesn't like it.

And she calls her vandalism "freedom of expression."

You see, to modern "progressives," the only values that deserve to be protected, the only beliefs that deserve a full and fair hearing by the public are their own.

The pro-Israel sign that Ms. Eltahawy vandalized is shown at the right above. And the video tape of the ugly incident where the journalist's crime (yes, vandalism is a crime) is interrupted by a supporter of Israel is shown below.

Ms. Eltahawy, as you might expect, has been freed after being charged with a simple misdemeanor. And what do you bet she will be more popular on the TV talk shows than ever? Indeed, the news coverage so far tends to be treating her as a hero.

Watch the tape below and then check out more on the story from Newsbusters right here. (But one caution about the story. Unfortunately, the reporter refers to the subway sign as an "anti-Muslim ad." That is not correct. Read it again for yourself. It is an "anti-jihad" and "pro-Israel" message.)