How's This for an Idea? Stopping the Drunk Driver BEFORE He Kills Someone. 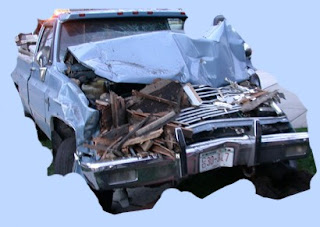 With his truck lights turned off -- indeed, with his mind turned off by a blood-alcohol limit nearly three times the limit -- Paul A. Newton roared down Easton Street in Canton, Ohio until he crashed into the car driven by Sondra Oldfield and her grandson. There were no skid marks whatsoever indicating he tried to brake his vehicle. Newton had blasted down the road completely oblivious to anyone who might get in his way.

Mrs. Oldfield's grandson survived the horrific crash. She did not.

The 48-year old drunk driver ended up pleading guilty to:
1) aggravated vehicular homicide
2) failure to stop after an accident ("Sheriff’s deputies caught Newton after he jumped into a creek and tried to flee.")
3) driving under a suspended license, and
4) operating a vehicle under the influence of alcohol. ("Investigators also recovered an open bottle of beer that still was cold.")

The drunk driver was given a 13-year prison sentence.

Too stiff? Not at all. He killed somebody.

And, oh yes; the fellow had five prior convictions for driving drunk.

Until someone is killed.

Why do lawmakers, cops, prosecutors, media and judges so foolishly ignore the cost of drunk drivers in America?

Consider the thousands of deaths that drunk drivers cause every year. Yes, thousands. We average one death by drunk drivers every 50 minutes. And remember too the suffering experienced by those victims that don't die -- those that must try to go forward with severed limbs, brain damage, paralysis, and on and on.

Consider too the devastated families. No one ever gets over the death of a loved one caused by a drunk driver. Believe me, I know.

And, while it is a minor factor compared to the others, society's leaders and supposed protectors should count up the huge economic losses caused by drunk drivers. That's hundreds of billions of dollars...and counting.

Dealing effectively with these crimes will require more effective education, the requirement of ignition locks on vehicles, more efficient police methods, and tougher sentences. All are do-able.

There are only a few stupider, more irresponsible things than driving drunk.  And one of them...is to ignore the terrible crises it creates.