Barack and The Media Sitting in a Tree... 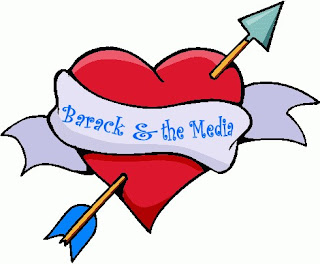 Election time in America has always been called the silly season. But in the era of Barack Obama, the darling of Planned Parenthood, Hugo Chavez, Madonna, and the most irreligious and sycophantic media we've known since Khrushchev's Pravda, I suggest a more appropriate term would be the sinister season.

Here's three important articles about this crude injustice that will help keep your wits -- and your morals -- about you.

Sunday night, on “60 Minutes,” the president of the United States said several gaffe-like things that would instantly become the sole issues under public discussion, would lead to pained panel discussions among chin-scratching analysts on NPR and PBS about tone and comportment and leadership and policy . . . if President Obama were a Republican.

Imagine if Mitt Romney had described the murder of US diplomats and former Navy SEALs in what might have been the most horrifying of conditions as akin to “bumps in the road.” Go ahead, I’ll wait.

Imagine if it’d been Paul Ryan. Or George W. Bush during his tenure. Or Sarah Palin. Or just about anybody.

You know what would happen. Democratic senators would emerge breathing fire, demanding an apology. Network newscasts would open with words like: “The political world was shaken today by the response of [NAME] to the murder of four Americans at the hands of terrorists in Libya.” MNSBC’s “Morning Joe” would devote three hours to the horror.

But not when it came to Obama...

Mitt Romney is facing perhaps the most corrupt and tendentious coverage in presidential history as members of the fourth estate eschew any semblance of integrity in their attempt to skew interpretations in favor of their pinup, Mr. Obama. The examples would fill volumes…

Media Malfeasance: Want additional proof the mainstream media act more like PR agents for the Obama campaign than watchdogs who "speak truth to power"? Here are three fresh examples from the weekend...