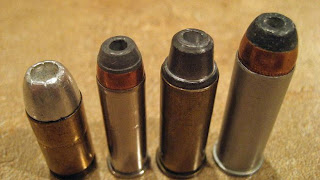 The FBI, Secret Service, Border Patrol, DEA -- okay. But does the National Oceanic and Atmospheric Administration and, gulp, the Social Security Administration really need to arm its agents too?

And with hollow point bullets?

Indeed, did you even know that these agencies had armed agents who possess the right to arrest you?

This Nanny State thing gets scarier by the day.

Here's part of the Fox News story on the matter.

..."Our special agents need to be armed and trained appropriately," said a message on the official blog for Social Security's inspector general office explaining the purchases.

The bullet purchases drew widespread attention as the website Infowars.com published several stories on them that were linked off the widely read Drudge Report and other sites. Infowars.com catalogued a string of recent purchases -- first by the Department of Homeland Security, then by the National Oceanic and Atmospheric Administration and then the Social Security Administration.

Infowars.com speculated that the purchases were being made in preparation for "civil unrest," imagining a scenario of economic collapse where seniors could cause "disorder" if denied their Social Security benefits.

But the Social Security Administration statement, posted Thursday, noted that their agents need firearms and ammo in the course of training, investigations and responding to threats against offices and employees.

"As we said in a recent post, our office has criminal investigators, or special agents, who are responsible for investigating violations of the laws that govern SSA's programs," the office said.

The agency said it has 295 special agents across 66 offices in the country. "These investigators have full law enforcement authority, including executing search warrants and making arrests," the statement said...
Posted by DH at 9:36 AM