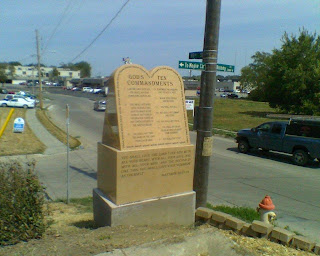 Claire and I just returned from a very pleasant luncheon meeting at Hope E. Free Church which Pastor Don Moore had set up to express his thanks to the pro-life activists who pray and sidewalk counsel down the street in front of the Planned Parenthood abortion mill. He also wanted us to know of the church's ongoing support for this ministry AND to invite us to join with the church in dedicating their new Project Moses monument.

A couple of ladies had prepared a selection of croissant sandwiches, coffee and cookies and we heard very encouraging reports about the impact of both the pro-life witness and the new monument from Pastor Moore and Project Moses' Omaha director, Joe Worthing. The group then was led in prayers by Pastor Moore, Fr. Michael Voithofer from St. Robert Bellarmine Church, and myself. And then we enjoyed time visiting, having lunch and appreciating the monument.

Claire took a couple of photos for me to use with this post but since she only had one of our cheap phones to use as a camera  ;)  I'll add a prose description too. 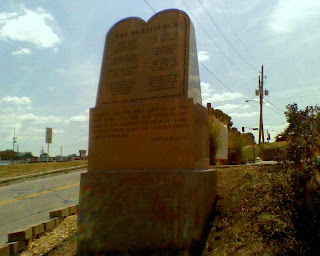 The monument has been placed on the southeast corner of the church property facing 93rd Street. It displays the 10 Commandments on the north side and the Beatitudes on the south side. We think it's a terrific public witness to the immediate neighborhood and to the street traffic which is considerable during "drive time" hours. It's also an impressive reminder for the members and friends of Hope Church to make sure their Christianity is outer-directed rather than being only for church programs. Also, we pray that the monument serves as an example to other congregations who might be moved to create similar public demonstrations of their Christian faith.

Finally, let me add that the church has begun a landscape fund so that they can create an appropriate setting for the monument; perhaps even a serene place where people can pray, read their Bibles and meditate. We think that's a great idea. But, like many small congregations, the church doesn't have much in the way of resources. (The monument was paid for by an anonymous donor.) So any contributions to the landscape fund would be greatly appreciated. Donations should be designated as such and sent along to Hope EFC, 9313 Binney St., Omaha, NE 68134.
Posted by DH at 2:06 PM