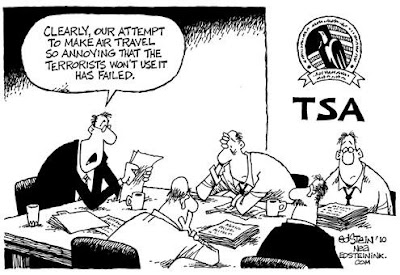 More than a decade after 9/11, it is a national embarrassment that our airport security system remains so hopelessly bureaucratic and disconnected from the people whom it is meant to protect. Preventing terrorist attacks on air travel demands flexibility and the constant reassessment of threats. It also demands strong public support, which the current system has plainly failed to achieve.

The crux of the problem, as I learned in my years at the helm, is our wrongheaded approach to risk. In attempting to eliminate all risk from flying, we have made air travel an unending nightmare for U.S. passengers and visitors from overseas, while at the same time creating a security system that is brittle where it needs to be supple...

By the time of my arrival, the agency was focused almost entirely on finding prohibited items. Constant positive reinforcement on finding items like lighters had turned our checkpoint operations into an Easter-egg hunt. When we ran a test, putting dummy bomb components near lighters in bags at checkpoints, officers caught the lighters, not the bomb parts...

"Why Airport Security Is Broken—And How To Fix It" (written by the former head of the Transportation Security Administration, Kip Hawley, and published in the Wall Street Journal last April) is a remarkably honest, enlightening and provocative article. Check it out.
Posted by DH at 10:27 AM