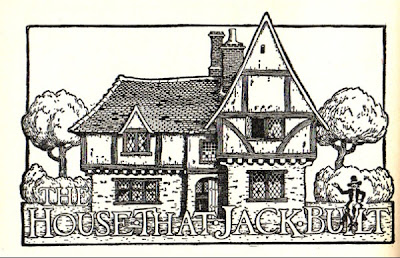 "This is the farmer sowing his corn
That kept the cock that crowed in the morn
That waked the priest all shaven and shorn
That married the man all tattered and torn
That kissed the maiden all forlorn
That milked the cow with the crumpled horn
That tossed the dog that worried the cat
That killed the rat that ate the malt
That lay in the house that Jack built!"

Forget this nonsense. You didn't build the house anyway. Somebody else made that happen.

P.S. The farmer is no longer sowing corn. His cornfields were taken by eminent domain for development as an outlet mall. The cock is dead. The priest now lives in a monastery because Christian values and practices are no longer tolerated in the public square. He wasn't needed anyhow -- who actually bothers to get married nowadays? Of course, milking maidens no longer exist; the FDA prohibits them. Dogs and cats are no longer around -- they were outlawed in a neighborhood covenant which was upheld by the 3rd District Court.

But the rat? Well, it it turns out he was of an endangered species and was therefore protected by the full powers of the government. He and his very large family are doing very well. Indeed, we're proud to say that my administration has been particularly proficient in serving the interests of rats. Please remember this come November.

(Other comic perspectives of Barack Obama's "You Didn't Build It" comment can be found in this Vital Signs post.)
Posted by DH at 12:54 PM