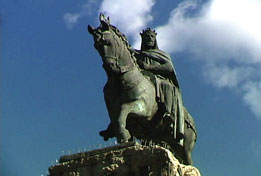 “Chivalry?  Why maiden, she is the nurse of pure and high affection, the stay of the oppressed, the redresser of grievances, the curb of the power of the tyrant.  Nobility were but an empty name without her.  And liberty finds the best protection in her lance and sword.”

Chivalry. The word itself stirs the imagination and moves the soul to embrace manly virtues: strength, courage, a willingness to fight in a noble cause. But also kindness, innocence, courtesy and grace.  And we must not forget honor, self-discipline, loyalty, and a burning love for God.

In recent speaking engagements (three Christian men’s groups, a gathering of teenagers, a church congregation), I’ve dealt with these themes.  And in these talks, I do not treat chivalry as myth or literary legend.  I deal with the subject as a historian and Christian activist, emphasizing to my audiences that chivalry did not live only in the romances of King Arthur, Sir Roland, Robin Hood and others.  Chivalry was a hard fact. It was a set of ideals, to be sure, but ideals which were devoutly pursued by men very much from the real world...

The July LifeSharer letter from Vital Signs Ministries is up on the website.
Posted by DH at 11:34 AM